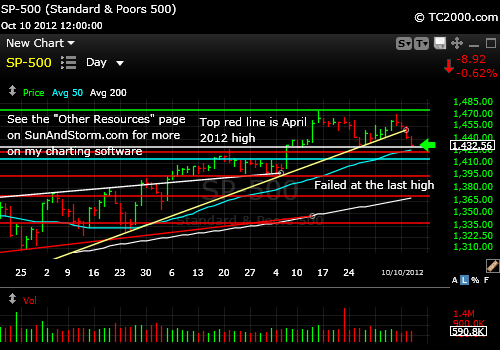 The SP500 Index is now sitting on some support. If it breaks below the white horizontal line, it could fall to 1397 before it finds support. The top red line, the April 2012 high is also a possible bounce point

The 10 Year Treasury Note sold off badly on Friday with the employment report.  The Fed won’t have to buy as many US Treasuries or mortgage backed securities if the economy is on the mend.  Earnings start coming out in earnest next week, so that should provide guidance for the 4th quarter.  Watch the initial reaction to earnings disappointments.  The trend often continues.  If there is a bad reaction to soft earnings for several companies, it will tend to repeat throughout the earnings cycle.  If companies look forward to the next quarter being strong, then you’ll see a pattern of reactions that fit that scenario.

Jack Welch, former CEO of GE, made the news by raising an eyebrow about the sudden drop in unemployment in the face of absent to flagging growth in the economy.  He deals with a lot of corporate bigwigs and they have all been telling him that this quarter was soft.  What he did not mention is that small to mid sized companies are the ones that have been hiring new workers.  Manufacturing is off but service jobs are up.  The truth is that the real unemployment rate is likely around 14% when you include those who have dropped out of the work force, so the government can make the numbers whatever they want.  We all know there are not enough jobs out there for those who would like to work.

The entire market is reflected by the bonus chart this week.  Small caps managed to pull up and out of their misery and rally enough to see an inflection point (barely) in the chart.  It was enough for me to do some buying as you saw on Twitter.

The SP500 Index has essentially re-topped as I discuss here:

Remember that the market is strong recently for one major reason – free money from all of the world’s central banks.  The last two pops in the SP500 Index (SPX, SPY) in the upward direction were due to first, the European Central Bank and secondly, the Federal Reserve.  They are goosing the market.  The results have been uneven at times, especially when our Fed seemed to be slacking off on the free money program, but the trend has been up despite the corrections, since the March 2009 bottom in our markets.

The corrections of the past 3 summers have formed higher lows.  This year’s market is even stronger as we’ve already recovered from the summer low and have made new highs.  The blind optimists will point out how close we are to the 2007 highs.  That was 5 years of a few percent dividends and that is about it.  Oops..and that is not to mention the fact that we saw that same 2007 high seven years earlier in 2000, so it’s been 12 years of not much for the SP500 Index.  Clearly the worst thing you can do is to sell at bottoms and not get back into the market after seeing that you were wrong.  The better thing to do is to preserve profits after long runs up in the markets and to not expect the market to manage your money for you.

The VIX volatility index has the opportunity to break the August and September lows and head toward the 2006-2007 VIX lows.  That is the Bullish opportunity.  Last week it did bounce off those lows and so there is room for more of a rise from here with a fall in the market.  The market has risen for 3 of the four days that the VIX has been falling.  The key Friday was that the VIX hit support and bounced, but so far the market was down only fractionally.

This week sentiment barely budged, so my conclusions at the above link remain unchanged.

The near month US dollar index (UUP, USDX) futures broke down and as a result, the gold ETF (GLD) nearly broke out to a new high – but not quite.   The dollar index just changed its long term signal to negative, so gold and silver will likely have some help.

Have a great week!  Stay alert as it is October!

The above is the text from this week’s free report.  To receive future reports ahead of publication with much more market timing information, please subscribe for free here: