UPDATE for 4-04-2013 @ 12:11 am: The SP500 Index has hit close enough to the 2007 high to say we’ve made it.  The move down today could be the start of a correction. Realize that positive data on Friday could cause the market to retop or go down if too strong, so being smug is not an option.  Why react negatively?  Because the Fed might meet its 6.5% unemployment target sooner than strategists though.

The next market timing target is at the red line shown by the arrow on the chart just below.  Today the Fed started talking about turning off the money faucet by summer, which spooked the market.  Is it just jawboning or are they serious this time? 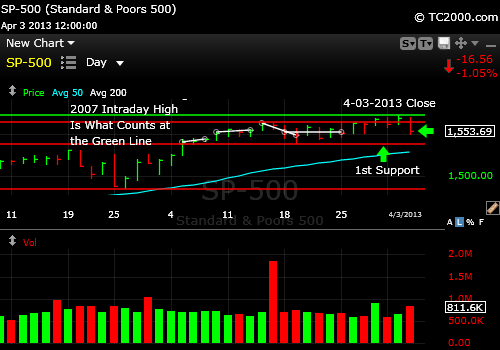 We’ve finally hit our major 2013 target and dropped down from it.

UPDATE for 4-01-2013 @ 10:08 pm: There was a reversal of the SP500 below the prior breakout from Friday.  This is not yet a definite correction starting, as it could be a one day test below the breakout point, but it gives the Bears the ball unless the weakness is promptly reversed tomorrow.

And now for this week’s text…

Talk about resurrections and new life!   The SP500 Index (SPY, SPX) is supposedly at new highs.  Is it?  Is this a new life or just a repeat of the 2007 high, which was a repeat of the 2000 high?  In terms of the closing high it is a brand new high, but not in terms of the all time intraday high of 1576.09.  My weekly readers know that one day over that high won’t be enough either.  Several days are required to substantiate a breakout.  I added to my large cap holdings by buying SPY, not based on a “new high,” but based upon the breakout above the red line that is clear on Friday’s chart shown via the following link:

That added back ¼ of that sold, so my equity exposure is now at 74.3% of maximum exposure (4-1 update: dumped it today due to reversal below breakout.  The reason to buy was the breakout, which dissolved away).  The purpose of giving you the information in that way is that you can compare what you are doing and make your own decisions.  I don’t buy the rigid rules that say if you are X age, you should have Y invested in stocks vs. bonds vs. cash.  And at an extreme low, you will see my exposure go above 100%.

We are not yet beyond a correction and of course, there are sometimes fake-outs at tops, so any new positions added from here will be sold immediately should the breakout fail.  Being wrong is not the problem in making investments.  Being wrong and doing nothing is the problem.

Small cap stocks (IWM, IWO, IWN) did not make a new high this week, while midcaps did.  Perhaps the rally if it does continue will be more top heavy.  Biotech (BTK) and drug stocks (DRG) made brand new highs this week and were on my New Year’s list.  What if they allowed drug commercials for heroin?  I’d bet more people would take that too.  My opinion is that drug commercials should be banned as they were previously.  Mute them when you are watching TV or they may brainwash you.  In the meantime, the commercials are working wonders.

Corporate bonds (LQD) were stronger this week as stocks rose.  That is not the expected “Great Rotation.”  Another sign of weakness is that the financials (BKX) have moved DOWN as the SP500 seeks its new intraday high.  Housing stocks (HGX) also say “No!” to the stock market rally.  Hmmmmm let me think…which were the two industries most involved in the decline from the 2007 highs?…Oh!  Housing and banks.  The fact that they are not moving up now is ominous.  They could pick up steam and solve the problem that way, but if they keep moving down, the general market will follow eventually.  Emerging markets perked up a bit, but must make it above their late February low to look interesting (VWO).  I sold 40% of my position and may have been early.  If you never sell, you’ll always be late of course!

Pop Quiz!  So take a guess!  Did Big Tech (NDX,QQQ) outperform gold since the bottom of tech in 2002 or was it the other way around?  Find out the answer at the Bonus Chart of the Week (see above link).

Speaking of gold, the worldwide financial system scares are getting smaller and smaller.  Cyprus turned out to be a financial gnat, easily crushed by a few billion dollars from governments and a few billion from individuals who trusted the Cyprian banking system.  When a banking system becomes much larger than the productive capacity/value of the country, guess who takes the hit following banking incompetence?  The rich depositors of course who may be giving up 40% of their assets over the insured limit of 100,000 Euros (about 130K USD).

Gold is going to need a bigger financial threat to get its blood running again or a significant rise in the inflation rate above interest rates would work as well.  It seems the world has been capable to responding to serial financial threats, so a steep rise in the current negative real interest rate will likely be the key.  If not before the Bulls celebrate brand new nominal SP500 highs, it will come when the Fed fails miserably to contain the inflation that it will face.  The Fed has always either over-tightened or over-loosened in regard to its monetary policy and you can certainly guess which one it is for our pal “Helicopter Ben,” a name that arose from his quote that he’d drop money from helicopters before letting the country fall into a depression at the expense of those who bothered to save anything.  Gold is faltering under resistance as shown in this week’s chart, but has not broken down yet through 2012 support as shown on the gold chart (see link to the charts above).

Some say the way to maintain wealth in the face of inflation is to follow Warren Buffett and invest in companies that can raise their prices despite inflation.  Those would be firms that have relative monopolies, not those like Apple that are now being challenged severely by Google’s Android phones and by reports from last week, by Blackberry.  Ouch!  When everyone thought they were dead, the Blackberry emerged from the dead and actually took market share from the Apple and Google platforms recently.  So Apple’s stock is going down, because it is losing business and has a new product pipeline problem despite its protests that it’s “Bat Watch” will be a huge success.  How many more gadgets do people need to do the same thing?  Mac, Ipod, Iphone, and Ipad, now I need an iWatch?  Iyiyi!  AAPL’s next support is down around 435 as shown (broken on 4-01, so we’re heading to the lower low on the chart below):

The VIX (volatility index) is back down at 12.70, below “my number” of 13.30.  I said last week that “It must dive below 13.30 again to allow any significant SP500 rally.  I don’t believe it’s very helpful this week, because it’s been bouncing around the 13.30 number.  We are at the Jan. and Feb. lows again, so there is room both to the upside as well as the downside.  It does not truly help this week, but its behavior around the 2007 intraday high will be a useful hint.

What of sentiment?  The AAII Survey of investor sentiment saw the Bull – Bear Spread expand only slightly from 5.6% to 9.7%.  Bulls barely budged and mostly the Bears dropped by around 5% and went into the neutral camp.  This allows for a further rally.  Sentiment certainly is not in the way.  I am not sure why, but most financial writers do not understand market sentiment and mislead investors accordingly.

Remember that in the backdrop, Europe is weak and the US government is spending less money in the economy, reducing our GDP.  Earnings are going to be pressured somewhat as a result.  This raises PE’s and could impede the market’s progress.  Meanwhile the Bulls can say that the consumer is spending fairly freely considering the higher payroll taxes and reduced government spending.  That as oil prices head up once again.  Will the spending continue after the late refunds of tax money are saved and/or spent?  So if the market ever wanted a wall of worry to climb, it has it.  It is when earnings are revised downward that the stock market pays the price.

Be sure to sign up for the weekly newsletter using the link below.  One reader just this week said:

I have been following you for a few years now.  As of late, the huge Santa Rally 2011 and the large run up in the markets from November 2012 through early March of this year 2013 have made me some very nice returns.  I made my buy and sells of stock funds using the market information from your newsletter and daily Tweets.  If this is the development of a correction in the Markets I am we’ll prepared to take advantage of it and my preparedness is directly related to your market analysis.