As Ben Bernanke collects his millions and millions in speech fees having decimated the poor who bothered saving through his near zero interest rates,  the SP500 Index (SPX, SPY) is at a new breakout high.  And we’ve added to our prior position.  That’s not a political statement, but a statement of fact.  If you want to know what percent exposure we are at in U.S. large, mid and small caps and in other markets around the globe, including a very recent European addition, subscribe here:  Free Subscription to My Newsletter and access to My Latest Comments/Strategy

Resistance is only 1.26% higher at around 1974 for the SP500 index.  1974.  Interesting that the SP500 Index low was 666 in 2009 and we’re up 196% from there.  Those numbers are numbers you and I should sit with and meditate upon, as they are living proof that markets come back and in general have the tendency to go up over time more than they go down, especially when given ample help by the Federal Reserve.  We attempt to find better entry points and exit points, but to be successful, we must stay invested until we get the clearer signals.  Or if not, we need to have other ways to counter the effects of inflation on our portfolios.

SP500 Index is Headed to the Top Yellow Channel Line

Speaking of inflation, there is not enough of that in Europe, according to Mario Drahgi of the European Central Bank, so he moved one of the bank’s interest rates to a negative number.  That has no practical consequence, because there is very little money exposed to those negative rates, but it did indicate that he’s attempting to be creative about increasing European inflation above current levels. The ECB also intends to buy bonds composed of small business loans to stimulate lending (ABC News on ECB: Not the Usual QE).

The other central banks have bought government bonds to lower interest rates directly, but the ECB is balking on that.  The Euro actually rallied somewhat, after the news came out.

Following the ECB news, gold (GLD) (click to enlarge) rallied a bit, but the rally is not entirely convincing and could stall as low as the 50 day moving average.   Notice how the 50 day just crossed below the 200 day moving average.  This is a negative technical signal, so our recent gold buy (see link above to see what we did), is very much a trade.  We maintain a long term GLD position as a form of monetary insurance, and even there, we set limits on how much we’ll give back to the house.  Betting on disaster is a bet that favors the house, so we protect profits at certain levels. 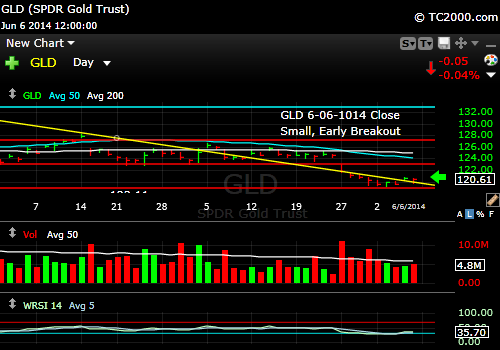 The 10 Year Treasury Interest rate (TNX, tracked by TLT if Bullish; TBT if Bearish) continues to move up over further resistance levels as this week’s chart shows (click to enlarge): 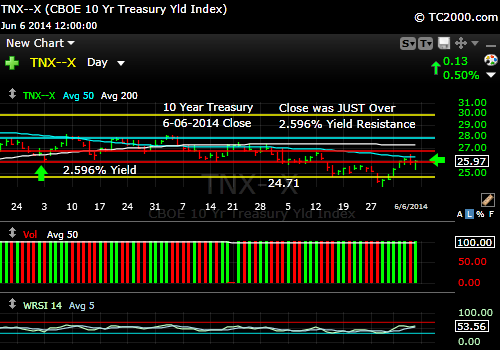 Look for updates this week as needed via Twitter.