Gold is finding some support now and rising a bit. Positive.

UPDATE after Close on 12-03-2012: The SP500 failed two points above my initial upside target today.  That was a good place to lighten up; however, as long as the top line holds on the chart below, which represents the low last Thursday, 11-29/2012, the Bulls still have a chance to exceed that target. 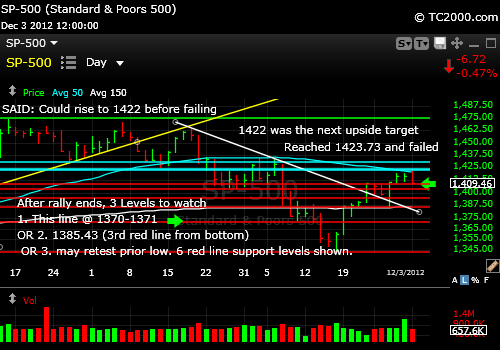 We indeed did rally up to resistance and for some indices we’ve gone beyond resistance at least a bit.   For example, take the small caps we had been following on the way down.  The Russell 2000 Index (RUT, IWM) has continued to bounce from the recent swoon when it dropped to the red line of support shown.

Now if you look at the SP500 Index chart, you’ll see that it is lagging the small caps technically (see above link for chart).

There is a bit more upside possible to the 50 day moving average and if we get through there definitively, the November high would be the next target and then a re-topping of the index.  My take is that without a resolution of the issues in Washington, we won’t get past the November high and could stop here or at the 50 day moving average.  That the small caps are leading is positive as it is harder for large investors to escape from small caps than it is from large caps.

Also on the Bulls’ side is the fact that the overall trajectory of the economy is not as bleak as the ECRI (Economic Cycle Research Institute) predicted.  They have had their stellar record stained by the prediction of a recession that was supposed to start months ago.  Eventually they will be right, but it does not count, because by their rules, their prediction of a recession was wrong.  A recession ALWAYS eventually comes, as this is the nature of the business cycle.  This is much like the record of the big fund managers who suddenly underperform the market for years.  Consciousness comes and goes even for the best of them.  That is why we ultimately turn back to the charts, because the charts show you what is ACTUALLY happening in the markets NOW, not what someone thinks is happening.

So what is the value of market timing this week?  It is to know that this would not be a good buying point to add to your SP500 positions as one example.  Why buy more just below a major signaling point that could turn the market down?  Why not wait for confirmation?

The VIX volatility index is pointed UP having held support this past week.  The bump up on Friday was on a day that the SP500 Index (SPY,SPX) barely moved, which is negative.  It means that investors are seeking more protection from a decline.

Gold (GLD) made some significant progress, and then gave it all back and is resting on support, which must hold or the Nov. low comes into play.  This is shown on the chart (see above link for chart).

The problem for gold is that the US dollar index (UUP, USDX) could break either way.  It has held on within a tight consolidation band that is now 5 days old.  Gold and stocks are very likely to run counter to the US dollar index, so keep an eye on it.

pre-open, 9:11 am, 12-04-2012: Gold did not hold the support shown at the link in the text of this week’s issue shown below.  It now has support at the 11-02-2012 low.  This behavior is interesting considering the fact that the US dollar is very weak.  Yesterday’s failure to respond to that dollar weakness was a clue perhaps to today’s weakness.  Is it the abatement of the Euro panic and unwinding of gold positions that were being used as protection?  I doubt it is that simple as Europe is still a big question mark going forward, but for now the world is seeing the Euro appreciate, so gold becomes less attractive short term.  Gold is certainly not a buy here. (see additional note below)

****ADDED @ 9:39 am: I would wait until it does a reversal back above prior support or if it hits the recent major low, it could also be bought with a stop.   The chart looks similar to that of 6-21-2012.  Gold did drift a bit lower but held above the major low of May.  So a bounce from around this level or slightly below is certainly possible.  Use a stop and average UP rather than down is my opinion.

This improvement in investor sentiment seems too fast and would tend to support that a retest is still going to happen.  If you see the VIX spike with the US dollar up, stocks will be headed to that retest.  If the opposite happens, a full retest of the prior market highs is very likely.

To receive future reports ahead of publication, please subscribe for free here: