Gold cracked back further as I felt it would after Friday’s dive below critical 2011 and 2012 support (GLD).  Sometimes things go exactly as the charts dictate.  Since no one has a clue what gold is worth above its marginal sales price (see the gold link below), gold can slide down to or below that price before it stabilizes.  The situation is interestingly very similar in the case of Apple.  Why?  Because no one knows what Apple (AAPL) is worth either considering the lack of a convincing pipeline of new products in a world in which half of the world or more already has a smart phone.  Samsung is pressuring sales, and we learned that now even the previously lifeless Blackberry is pressuring their sales.  So what is a company worth that is under attack without a “Coke formula mote” to defend itself?  The patent battles offered Apple only partial protection.

What happened to gold can be seen on the GLDTracker™ page at the following link: Market Timing Charts

So what happened on the Apple chart?  Same thing as gold.  It broke support AGAIN this week and dropped another chunk of its valuation as the chart shows (note: Apple earnings are out on Tuesday):

AAPL has the look of gold!

And why did stocks start to correct after the big celebration of the breakout above the 2007 high.  Blame it on gold liquidation they say.  Due to the unwinding of big gold positions, other assets came under selling pressure, or so we are told.  Ultimately all financial assets come into alignment in value and the stock market is finding its spot too given:

– Decreased government spending in the form of the sequestration

On the plus side there is:

–  An improving financial picture (really just less bad) for the U.S. given the increase in taxes and decreased government spending

–  The common belief that the U.S. economy will be stronger the 2nd half of the year (without a clear basis being given except that the sequestration might be fixed eventually).

–  Obamacare might be modified to fix some of the onerous consequences for firms with over 50 employees.

The SP500 Index (SPX, SPY) started to correct this week and hit the 1540 area of support as explained by the SP500Tracker™ chart at the above link.

A break through that area next week could bring more pain, but the Bulls can point to the “save at support.”

The VIX hesitated in its climb back to the late February high.  There is again room for it to fall and 19.28   should cap its rise.

Investor sentiment lost some of its extreme Bearishness this week with the AAII Individual Investor sentiment moving to a spread of -21.4% from -35.2%.  Bears eased down to 48.22% from 54.48% and Bulls rose from 19.31% to 26.85%.  That allows the Bears room to grow in number or if the correction is now over, the Bulls to continue rising.  Interestingly the last time there were about the same number of Bulls of around 55%, the market had just found support near the 50 day moving average and then rallied slowly over a couple of months and gave it all back before rising to a new high and giving that all up and then some into the summer.  Here is the WEEKLY chart with Nov. 5th, 2009 at the green arrow when Bullish sentiment was at 55.56%: 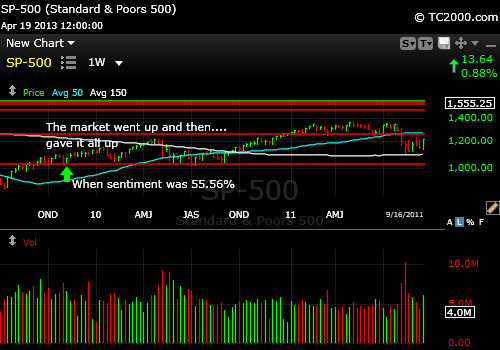 With Bullish sentiment at a similarly high level, this is what happened in 2009.

The above chart would suggest that there is no rush to get into this market, but it also says that if you bought at that support, you would not have had to worry about the market going lower any time soon.  The market has not revisited the 1069 area since that time, and you could have collected the dividends during that period of waiting for upside.

1. Gold is in mid-fall and there is no sign of stability yet, except for the consolidation.  It could move either direction from this point on the chart

2. The SP500 Index found support at 1540 and sentiment at these levels has predicted HIGHER not lower prices in the past.

3. Stocks that suddenly become hard to value like Apple are bad investments.

4. The Treasury market will spill the beans early next week.  If interest rates move to new recent lows, the SP500 will break support.  So this will be our check on the prediction from sentiment.

5. Stay away from commodity producers as their product is going on discount (CRB dropping) and may go still lower.

6. I added some municipal bond exposure this week.  There is some overhead resistance I expect it will get through next week.  It will be easier to do so if stocks sell off.