Market Timing Brief for the 2-06-2015 Close: The SP500 Fails a Breakout as Sentiment Falls. Gold Eases. Rates Spike to Resistance.

The SP500 Index failed to hold onto a breakout that occurred after a positive employment report showed that non-farm jobs were at 257,000 vs. 230,000 expectations.  The market reacted negatively, because the market believes that the Fed is more likely to raise rates by June or July.  What the market is not registering is that, in the past, as interest rates were raised by the Fed during a recovery, the stock market did just fine until the arrival of the next recession.

Why the slight pullback in stocks then?  Beyond the looming Greek debt problem following their election, the U.S. bond market has been believing that deflation worldwide is the issue and that the Fed would not move in summer or at least the rate increase would be no more than symbolic in terms of its effects, because the economy was strong enough to withstand any minor rate increase.  But interest rates spiked on Friday, which would seem to reflect a different belief, namely, the Fed is going to ignore world conditions and raise rates in the face of worldwide deflation, driving up even longer term (10 year and longer) rates.

You can see the SPX pulled back from that top aqua line which represents the two January highs.  Why is it useful to know this?  Because this is NOT the place I would suggest buying, because it’s closer to a top of the range than the bottom of one.  The pullback could be back to about 1988 or to the December low perhaps.  Sentiment is another reason to wait as I’ll get to, but first look at the chart below. 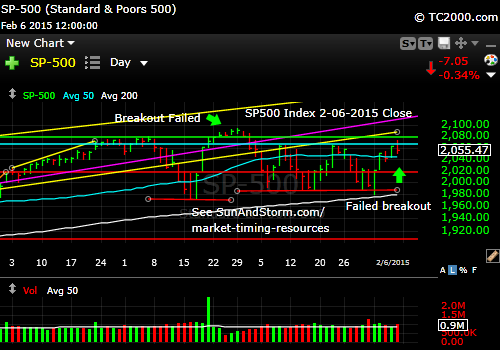 SP500 fails a breakout out of the recent range.

My concern about market sentiment is that gains in sentiment are not holding.  This is a negative in my view and a reason not to be overexposed to stocks here.  It’s possible that the October lows could be retested from here, given the spike in volatility and triple top on the daily chart above with a failed breakout to go with the sentiment problem.  As mentioned above, I would not at all be surprised by a drop to the Dec. low at a minimum.

Volatility has spiked to a value above the early 2007 high, and we all remember what started in 2007, a Bear market.   I am not claiming a Bear is around the corner, but I am saying that we may be part way into a bigger pullback.  Volatility clearly has room to rise to the high 30’s to low 40’s from here if Greece blows up in Europe and that destabilizes the banking system as an example.  Look back at the VIX chart in 2007 and you’ll see that volatility spiked earlier in the year, and then calmed down.  That was followed by a massive spike in August 2007 with the first significant sell-off for the SP500.  Remember that sentiment is only one parameter that we follow here and price is the final arbiter of the Bullishness or Bearishness of markets.

As for U.S. small caps, unlike the large caps, they have not broken back below their recent breakout above the prior range.  This may give us a hint that large caps could hold up at the 50 day moving average, as long as small caps stay above that top aqua line.

Small caps are still above the most recent range.

Gold eased back to support of the 50 day moving average as interest rates spiked on Friday on the U.S. jobs report.

Gold eases back to just above the 50 day moving average.

Gold has been rallying in dollar terms because 1. there was a currency panic going on in Europe and Japan, which drove organic gold buying.  2. The upward pressure of the U.S. dollar was less than #1 (U.S. dollar up normally means gold down unless there is counteracting organic buying).  Now panic is subsiding, which makes gold less attractive as an organic purchase and the U.S dollar was still strong on Friday based on the strong employment report.  Healthier economies will have higher interest rates.  Higher interest rates attract investment in the given currency.

The 10 Year Treasury interest rate (TNX, tracked by TLT if Bullish; TBT if Bearish):  Rates spiked to first resistance.  Perhaps they climb to and fail at the 50 day moving average.  My belief is that long term rates will stay contained if the Fed is raising the short term Fed funds rates.  Worldwide deflation is the current issue, not inflation.

Please Click the TNX Chart to enlarge it (NOTE: This is a weekly chart): 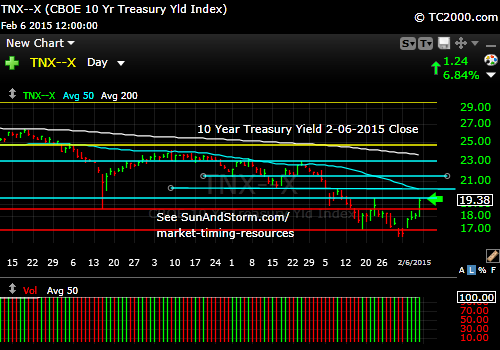 Rates spike to nearby resistance.

CONCLUSIONS: The SP500 (SPX, SPY) needs to almost immediately rally to avoid falling to the base of the prior range.  Gold must hold here or the rally will vanish.  I suppose it could fall to the top red line in the chart above and survive, but the odds of a continued rally diminish if it does.  Rate could stop here, but it’s possible that they will rise to the 50 day moving average before resuming their decline.  Sentiment (see discussion above) concerns me the most particularly given the failed SPX breakout on Friday and issues looming over Greece for the European Union.

This may not be the point at which to lower stock exposures from your usual allocation, but it would be reasonable to trim overexposure to U.S. stocks in my view.  As long as Central Banks remain accommodative, the markets are likely to find support higher rather than lower, that is, until the next recession rears its head.

I cover foreign markets on social media (see links above) and in my montly newsletter.  Note that the newsletter is now closed again to new subscriptions: Join the Wait List to Join the Newsletter as a Loyal Subscriber, Opening again for the April. 4th issue.  If you join and don’t read the newsletter, you will be deleted.  I don’t publish to non-readers as other newsletters do.  Stay tuned here in the meantime and follow all the action via the Twitter® and StockTwits® links above.