Market Timing Brief™ for the 9-16-2016 Close (9-21-2016 Post-Fed Update!): Stocks, Gold and Treasuries all Whip Around as Volatility Spikes Then Calms Slightly.

UPDATE for 9-21-2016: After the Fed Decision to Hold Rates Constant

The move today was positive, but we need even more from the Bulls to make this an important move.  The red line you see right above today’s close is the next challenge for the Bulls.  Will the markets wait for the 1st debate to make that move?

SP500 Index rose within the vibrational range discussed below. Positive shift, but more is needed.

1.  SP500 Index: The U.S. markets initially reacted positively to Fed Governor Brainard’s comments on Monday, which leaned dovish, and then the Federal Reserve went into a quiet period ahead of their two day meeting for Tuesday and Wednesday. At that point market timing traders were frustrated as the market then decided it did not actually know what the Fed will do Wednesday and vibrated up and down wildly within a consolidation range.  No progress has been made except that we’re off the 9-9-2016 low.

By Friday, volatility had calmed down a bit, but the catch is that volatility is still in an up trend.  We are clearly waiting for the final decision of the Federal Reserve.  Set your market timing clock to 2 pm Weds. and hang on until then!   Oddly and VERY unusually my “number of the day” which I called “the number of the afternoon” due the big spike in volatility, became the number of the day for FOUR days in a row, something that we rarely see.  The SPY “number of the week” was 213.25 by the way.

Be alert on Wednesday.  I’ll be live-Tweeting the Fed event starting at 2 pm on Weds.

SP500 Index vibrating with higher volatility within a range.

Survey Says!  Sentiment this week among individual investors (AAII.com) showed a Bull minus Bear percentage spread that was barely tilted toward the BEARS at -7.98%.  The percentage of “Neutrals” is back under 40% (above 40% Neutrals is Bullish on a market timing basis for higher prices out 6 months from today per AAII studies of their statistics).

This is still not an extreme.  Extreme Bearishness usually results in spreads of up to 20-30 or more in extreme circumstances and there is room for sentiment to move in either direction from here, so beyond knowing that, it’s not helpful at the moment. Recognizing that the selling may not be over is useful.  Stay flexible.

2.  U.S. Small Caps: Small caps rose to resistance after Federal Reserve Governor Brainard’s comments.  It is likely that stocks will be aimless, but possibly still volatile, prior to their final decision Weds. and what Dr. Yellen says in the 2:30 pm ET televised “dog and pony show” will also be important should there be any surprises. 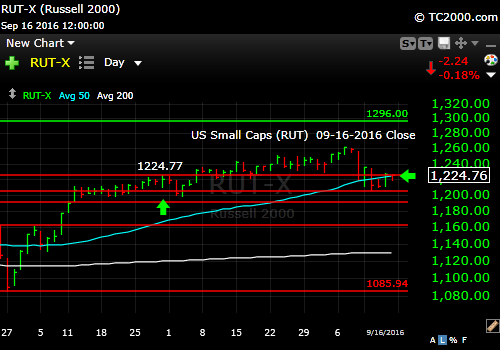 3. Gold:  Gold is under pressure due to the fear that the Federal Reserve could make a mistake (vs. their working belief system!) and hike rates into a slowing economy worldwide.  This is a good buying point if you believe the Fed will have to stand pat on rates.  If the Federal Reserve raises rates, the economy will slow further and gold will do even better though initially gold could take a further hit, so consider averaging into it here and be prepared to buy more if the Fed makes its second mistake.

Gold under pressure due to belief that Fed could hike rates.

4. U.S. 10 Year Treasury Note Yield (TNX): Interest rates rose just a bit over the past 5 trading days within the same triangle I pointed out last week.  This may be a good point to ADD Treasuries, although there are plenty of investors betting against them, which has stretched them in their trading range to the upside.  The Federal Reserve decision will determine the next move in ALL the markets discussed.

Rates rise in the 2nd triangle. Interest rates should fall if the Fed does not raise rates Wednesday.

Stay with me throughout the week for the LATEST via the links to Twitter/StockTwits above.  Feel free to ask me questions, comment, retweet etc.

Note that the newsletter is now CLOSED to new subscriptions: Join the Wait List to Join the Newsletter as a Loyal Subscriber, Opening again for the October 2nd issue. If you join and don’t read the newsletter, you will be deleted. Why? I don’t publish to non-readers as other newsletters do. I surround myself with committed people who value what we are doing. Stay tuned here in the meantime and follow all the action via the Twitter® and StockTwits® links above.