Market Timing Brief™ for the 8-18-2017 Close: Stocks Slide. All Small Cap Gains since December Are Gone. Gold Fails a Breakout. Rates Below Trigger.

1.  SP500 Index: The “Summer Market Timing Season” is upon us.  And there goes the President’s report card!  He said the stock market was his report card, and he’s just achieved a D (being generous) for small and midcaps.  All capitalizations of  stocks slid on horrendous PR for President Trump, who this past week was unwilling to categorically condemn the Nazi protesters in Charlottesville the prior weekend.

He keeps delving into ridiculous arguments, such as why we should preserve Confederate statues in public parks and has clearly taken his eye off the ball.  Here is how you handle an issue like this: “The statues belong in museums perhaps to preserve history, but need to be placed in proper context.  They do not belong in public parks.”  See how easy it is to lead, when your thoughts are clear?  The President seems addicted to being oppositional and winning arguments at all costs like a poorly behaved child with ADHD thrown in.  Every day is a new attack.  The vast majority of voters are clearly tired of his behavior, now including many Republicans and Independents.  I hope he can get back on track.

The markets despise uncertainty and now have a heap of it.  Things have not quite gone off the handle, but if our President keeps dripping his acidic remarks on our country, the markets will head down into a real Bear market.  If you care about your money, tweet to the President and urge him to FOCUS ON WHAT IS IMPORTANT.

I took market timing profits in all my new buys (all were profitable) and also took some other profits in a stock that had given up too much for my taste.

The good news is the economy is still on track, but the bad news is that Trump could derail it by further eroding confidence.  How? By firing Att. Gen. Sessions for example.  That would result in a deeper knee-jerk sell-off, because it could endanger Trump.  The market was said to react specifically to the rumor that Gary Cohn, Chief Economic Advisor to Trump, was leaving, but it turned out to be untrue, or perhaps he settled back down.  He is the first choice for Fed Chair, a prized crown, so Mr. Cohn may just suck it up and stay put for that.  First he has to pass tax reform, and then Trump may let him take over for Dr. Janet Yellen in 2018.  I bet Dr. Yellen won’t want to be in the job herself come 2018.

What have my “market timing actions” been?  I have not dropped my exposure all that much yet, but I am watching things and will scale back further if I don’t like what I see there or in Washington.  Until recently buying each market decline has worked, but without a smoothing out of the political path to something better than this week, buying the dips could begin to fail.  Technically, there is clearly room for more of a fall, as we took out a level of SP500 Index market timing support on Friday.

To see my current exposure, go to one or both of the social media links below and keep in touch during  the week for my up to date buys and sells (I will update it before midnight tonight).

Keep up-to-date during the week at Twitter and StockTwits (links below), where a combined 29,600 people are joining in…

Stocks slide and there is room for more of a pullback.

It is interesting that sentiment did not become much more Bearish on the Trump mess with the spread between Bulls and Bears almost exactly the same as last week.  This gives me some sense that as long as the President is QUIET, the markets can recover, and the economy can stay strong.

2.  U.S. Small Caps: I said last week: “Small caps concern me more thus far than the SP500 Index…  Still, all gains going back to Dec. 9th have been wiped out by crossing that line to the downside (not counting small dividends).  And that line was a test of the Trump expansion thesis.”  The selling continued this week and we tested 134.12, a point above the red market timing support line shown of 133.12.  Breaking that brings next support into play if it happens this week.  Remember that I refine my view of the market using other technical parameters as they deal with support and resistance lines.  It’s not enough just to look at the lines.  I also track the economic backdrop of the price action, which remains solid thus far, as I discussed above.

Note how the small caps rebounded to test the orange “Trigger Line” from below, before failing once more.  That often happens on bounces that fail.  Resistance is retested and down the market goes…  We may yet head to the next red line below immediate support.  Where this will stop is unclear right now, and that is why I’m looking at the entire economic, technical, and political picture as a whole.  I want to see stabilization in both technical and political terms that match the strength in the economy.   My sense at the moment is the stock market selling is not over yet.   I summarize the “Trigger Line” market timing signals below.

Will all the gains be lost since the election of Trump?

3. Gold: Rates began falling early in the week and then reversed as the fallout from the Trump comments hit the fan, but the Friday rally failed.  Therefore, despite the strength, I would trade the range for now and exit new trading positions as gold just failed a market timing breakout on Friday.  I would hold the trades in gold IF gold immediately rallies on Monday.  For now, it looks like a quadruple top, unless it can break to a new recent market timing high.  ONLY if rates fall further from here now that they’ve crossed the “Rate Trigger Line” to the downside, can gold break to new recent highs.

4. U.S. 10 Year Treasury Note Yield (TNX): Rates zigzagged this week, just as gold did, but in the opposite direction, going higher and then dropping below the orange market timing “Trigger Line” in the chart below, and that is Bullish for bonds/Treasuries and Bearish for stocks.  Rates fell toward the end of the week based on the loss of faith in the Trump Presidency.  Weak President, weak policy, weak economy, weak dollar.  It all comes home to roost. 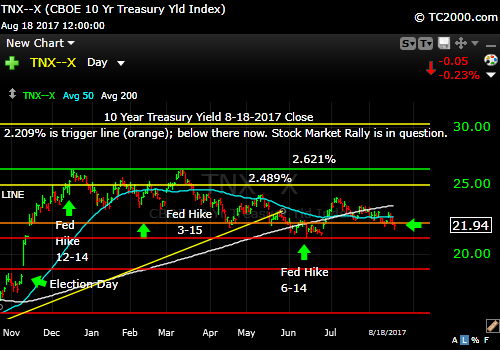 MY SIGNAL SUMMARY for a Further U.S. Stock Market Rally

Stock Signal OFF (small caps below “Trigger Line”), Gold signal ON (good for stocks, not gold, though barely ON), Rate Signal OFF (good for bonds, not stocks).

3 Responses to Market Timing Brief™ for the 8-18-2017 Close: Stocks Slide. All Small Cap Gains since December Are Gone. Gold Fails a Breakout. Rates Below Trigger.