Update 11-22-2017: S&P500 Index Sectors Winning since 8-21-2017 Low:  Market timing requires continually following which sectors are doing well.  Adding exposure to sectors that are underperforming the SP500 is generally a bad market timing approach unless you happen to catch the turn.

Tech, Energy and Materials have been the real winners since the August low, with Tech leading by a wide mile, XLE and XLB doing about equally well, and Financials barely besting the SP500 Index.  The other 5 sectors of the SPX did worse than the index itself (that last conclusion was not corrected for dividend payments, but the table below was).

Back to this week’s brief…

1.  SP500 Index: In market timing terms, the SP500 Index is about in the middle of the recent short term range. Progress on tax reform brightened things up a bit on Thursday, though it depended on what you owned.  Microsoft, Apple, and some others were giving back some of the outsized gains they saw after earnings this quarter.

Over the intermediate term, the tax cuts being proposed in Congress will drive our national debt up, putting upward pressure on interest rates and downward pressure on the U.S. Dollar.  Inflation should increase in the coming several years.  The unwinding the the Fed balance sheet and the hiking of interest rates by them will be the proximate cause of the next recession, which will occur in the face of at least moderate inflation and with the 10 Year Treasury Yield rising to 4-5%.  That will take a while, so I’ll continue to advise you make hay while the sun shines.  I would also stay invested in both gold and a much smaller percentage of a portfolio of cryptocurrencies.

For those following my “Canary in the Trump Gold Mine” Trade, Bank of America (BAC) backtested the prior breakout and bounced sharply.  A drop below the breakout area (25.80 breakout which is barely above the Weds. low of 25.81 – NOT a market timing coincidence!) would not be received well.  The bird will and must fly in a strong economy..  It will be singin’ the “Red Song” if the prior breakout is voided. We prefer the “Green Song” around here.

We don’t buy in the middle in general.  We buy off the lows as best we can.  So having added exposure off the low, we wait for specific stocks to test their next lows or for indexes to do the same.

Keep up-to-date during the week at Twitter and StockTwits (links below), where a combined 32,274 people are joining in… 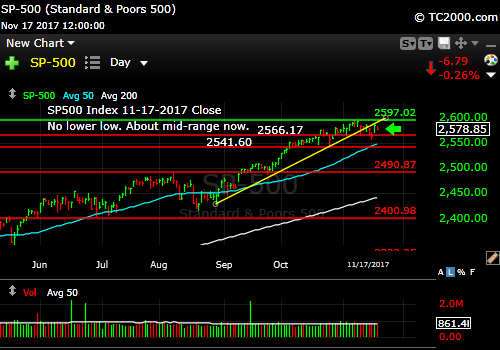 Middle of the recent range. Buy low, not in the middle.

Survey Says!  Sentiment of individual investors (AAII.com) showed a Bull minus Bear percentage spread of  -5.87% vs. +22.02% vs. last week or incrementally much more Bearish, but not at an extreme.  I mentioned last week: “Sentiment is positive enough to allow for a pullback, given the low Bear number, but it’s still not at an extreme.  A pullback is a market timing Buy per the sentiment data.”   So did you buy some more this past week?  If you were already very long equities, maybe not, but if you were lightly exposed, it was a place to add more exposure.  Bearish Sentiment can go much higher with the right backdrop, but we don’t have a Bearish backdrop now, which will allow sentiment to improve, and the market to run higher.

2.  U.S. Small Caps: Small caps turned around when interest rates did, so be sure to follow rates if you are invested in them.  You’ll note they fell to retest the breakout level of 144.25 and bounced. I commented on that swoon last week on social media when it happened.  You can also see they bounced to the upper part of the market timing formation shown, which is a Bull Flag (read last week’s comments; link to upper right).   Without going over the top yellow line of the flag, the move was just a short term trade.  IF there is a rate breakout this next week, early in the week, I believe small caps will rally further and at least test the prior high.

Small caps still not “up and over.”

3. Gold: No need to repeat last week’s comments.  Rates were down a bit from last Friday’s high, which was not a shock, and that helped gold.  I still expect higher rates going forward.  IF gold can exceed the prior two market timing highs noted in the chart, it could really take off.  For now, and until that happens, we’re still out of the gold trade, while holding gold as insurance in our portfolio.

There is a story out there that China will be attempting to displace the US Dollar as the reserve currency for oil contracts with the Chinese yuan.  They intend to back “petroyuan” contracts with gold.  Maybe gold buying by the Chinese is one of the drivers here.  It may not be able to overcome rising rates, but we’ll see.

Gold is also cheap relative to Bitcoin.  Owners of bitcoin who do not also own gold are foolish in my view.  They could balance their holdings with gold, and perhaps real estate depending on their particular market.

Gold is threatening a big move, but it must exceed those two highs noted in the chart.

4. U.S. 10 Year Treasury Note Yield (TNX): As I’ve argued for a while now, rates must rise slowly to confirm the recovery will continue.  This is normal at this time of the cycle.  The one thing constraining our rates is the rates of other nations, which remain highly accomodative.  Fiscal policy could drive inflation up faster in the U.S. as wages rise.   I outlined all that last week.

Low unemployment is the worst backdrop for a fiscal stimulus.  Trump thinks growth at all costs is great, but that is not the case.  He’s about to get a lesson on inflation over the next few years.  Maybe that is why gold wants to move higher.  Maybe inflation is actually going to become the Federal Reserve’s next problem due to the years of financial stimulus they have pumped into the markets.  I’ll be watching.

Rates need to move up this next week.

Stock Signal ON (Small Caps above “Trigger Line”), but a breakout above the flag (market timing signal) is needed.

Gold Signal OFF (GLD is slightly above the “Trigger line” which is positive for gold, and a warning sign for stocks in the form of inflation.  A breakout above the two prior highs noted will propel the gold trade.

Rate Signal ON (10 Year Yield above the “Trigger Line,” good for stocks, not bonds).  Rates back to rising, but with a pullback this week. That’s the way markets trade.  As long as we see rates above the aqua line in the above chart soon, the thesis on the recovery is intact.