Market Timing Brief for the 8-29-2014 Close: We Have Another SP500 Index Breakout. Gold is Holding. Rates are Falling.

There has been yet another breakout in the SP500 Index (SPX, SPY).
Sometimes breakouts are reversed.  In fact, both the April and the July breakouts were reversed, so it’s not hard to see that the latest buyers could end up feeling disappointed by their purchases.  Before I get to the Bullish case, please examine the chart below. 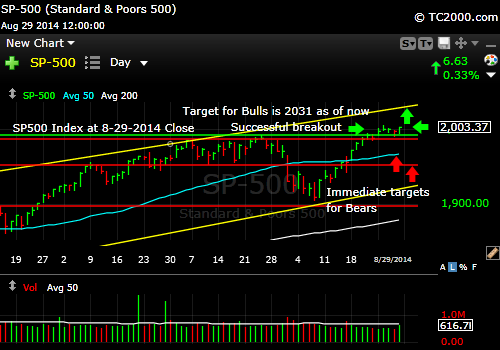 SP500 with a Fresh Breakout

The Bull target is that upper yellow channel line in the chart above.  If we arrive there quickly, the odds of a reversal from that line would be significant.  If the rise is more hesitant, over time, the upper boundary of the channel rises, so an even higher high would be possible.

Meanwhile, this week the investor sentiment data presents a couple of alternatives.  You can read it here:  Survey Says! What About Investor Sentiment?

U.S. Small Caps: Where are the small caps (RUT, IWM) at this point?  Since the double two wave scenario was voided last week by the close above the prior daily high.

Let’s look at the chart first: 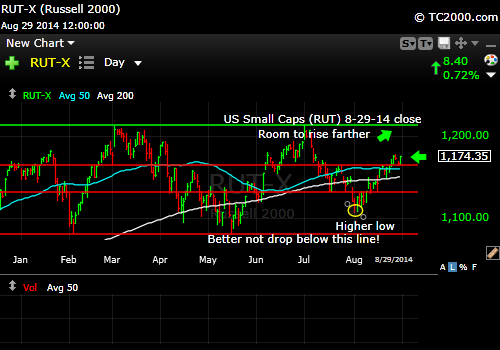 Small caps break up through the potential double top

It’s unfortunate that markets are not more rational, but as the PE ratio of U.S. small caps rises, so do the stocks once again in the channel shown above, which peaked in March.  One has to wonder how unaware markets truly are.  Very unaware is the answer.  The trailing 12 month PE for the Russell 2000 small caps is 81.17 per Birinyi Associates via the Wall Street Journal: U.S. Market PEs.  It had fallen to the 60’s as I recall from past publications, but has risen back to the 80’s after the most recent earnings season reports.  That means that there were “special charges” and the like that ruined the improving numbers.

Corporate accounting is a form of organized lying at times.  It’s generally done legally too.  Companies are sometimes judged too easily based on operating earnings that exclude the corporate screw-ups.  If you repeatedly screw up in “special” ways that yield “special charges,” doesn’t that mean you are running the company poorly?  I’d say so.

It’s also interesting that analysts will lower earnings going into the actual earnings release and they then have supposedly “met” the earnings expectations.  Fortunately, you often will see stock prices fall as earnings estimates are trimmed.  That’s the way it’s supposed to work.  You can follow all that on various websites.  One that I like is Yahoo Finance!  This is the data for Gilead Sciences (GILD), a stock we bought back prior to the recent run: GILD Earnings Report and Estimates at Yahoo Finance!  You can see that Gilead has rising estimates, in part due to the new Hepatitis C treatment that is controversially expensive.  The morbidity caused by Hep C is even more expensive apparently.  Liver failure and liver cancer are big costs for those unfortunate enough to be infected.

I for one, do not like to buy a stock with falling estimates.   I’ll wait for the fall to stop and likely the stock to stop falling before considering a purchase.

Gold:  GLD, the gold ETF, held support at the second red line from the bottom in the chart below, but it’s coming off that low slowly.
One would think that falling rates would be of more help to gold than they’ve been.  The problem for gold is that the U.S. dollar has been stronger of late. Gold has eased back from the beginning of the year rally beginning around mid-July as the U.S. dollar strengthened.  Why has the dollar been strong?  Likely because of the international unrest we are seeing particular in Europe, and, perhaps more importantly, because the European Central Bank (ECB) is driving down the Euro, which is a major component of the USD index.  Money running into the USD is driving the dollar up and gold in dollar terms down.  That’s how it works.

To understand the various scenarios, review the relationship between gold and currency movements here: Gold Price in Currencies 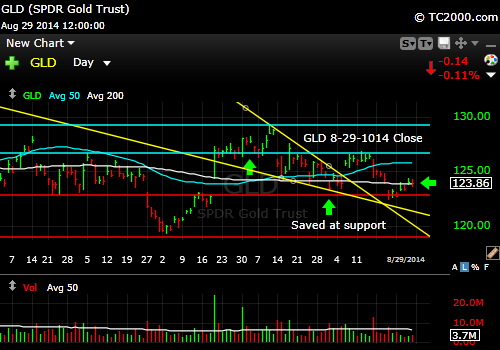 Gold is in a position to rally once the run in the USD is over.  If the Fed raises rates sooner than we think (less likely now that the world’s economy is slowing a bit), gold will be pressured as the dollar rises with U.S. Treasury rates.  That is why I always look at the 10 Year Treasury when I look at gold.

The 10 Year Treasury interest rate (TNX, tracked by TLT if Bullish; TBT if Bearish): Rates backed down once again to retest recent lows.  The fall in rates this year has been spectacular vs. most predictions.  This should support a strong gold rally IF the U.S. dollar stops strengthening due to Euro weakness.  Europeans should be buying lots of gold as their currency is trashed by the ECB’s actions.  Gold has formed higher lows vs. all four major currencies (USD, Euro, British pound, Japanese Yen).  That is Bullish for higher gold prices, but the prior major daily low must hold (bottom red line in the ABOVE chart). 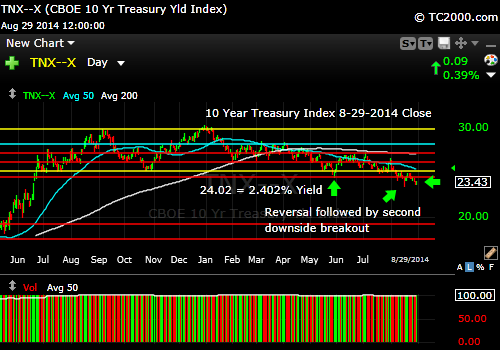 Rates are falling, not rising as so many thought they would in 2014.

Note that the newsletter is now closed to new subscriptions, but may be re-opened in the future.  Stay tuned here in the meantime and follow all the action via the Twitter® and StockTwits® links above.