The SP500 Index rose 0.17% after the employment number came in at 321,000, much hotter than expected.  The market has not discounted that figure, so good news could be seen for what it is, as good news, after some digestion of the news.  The other point of view is that the Fed must now raise rates as soon as March, so one should sell stocks ahead of rising rates (I don’t see this happening soon, due to the slowing around the globe).  You should also know that although a rate increase could frazzle the market for a bit, rate increases that are associated with stronger economic growth lead to HIGHER stock prices eventually.  That’s historically proven.

There is nothing the market loved more in the late 1990’s than employment numbers that were strong month after month.  It is not clear that the employment surge is sustainable against the backdrop of falling oil prices (and falling employment in the oil fracking industry) and slowing around the globe.  However, there is enough room above for a further rally of a few percent in the SP500 now that we are about mid-channel for the SP500 Index as the chart shows.  The Bull minus Bear percentage spread of individual investors at AAII.com fell from 31.4% to 16.7%.  That is not the sentiment move you want to see if you are Bearish.  You want investors cheering and throwing hats into the air at the tops, so this is clearly not the ultimate top for the market in sentiment terms.  At the same time, that does not mean the market cannot retrace a bit.  It means that the retracement should be bought, and we should be fully invested at or near these levels.

Admittedly, I am a bit more invested abroad including in China than in the U.S., because China’s growth prospects continue to be better even though they have slowed.  Chinese stocks are being opened up to the rest of the world whereas the A shares were a closed game before (watch the premium vs. discount when you buy; don’t buy the ETF’s if they are too rich in premium; and some are illiquid so watch the spreads too). 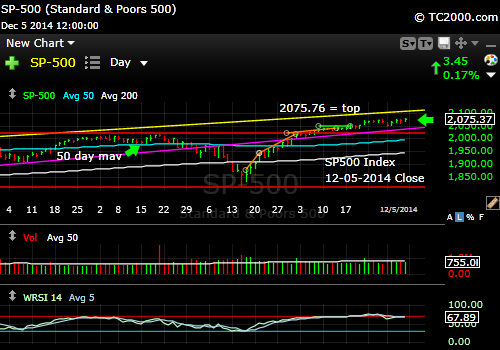 SP500 is about mid-channel now. 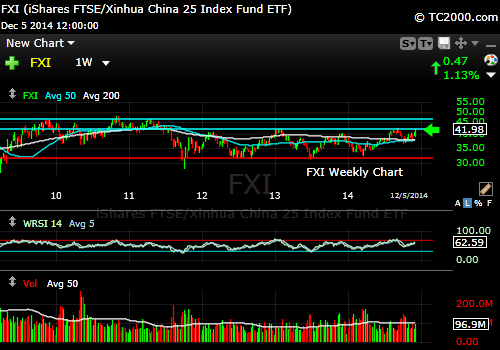 Chinese stocks still have some room and could break out to new highs vs. past 4 years.

What about small caps?  They are failing to move to new highs, even as the SPX does so.  This is a warning sign about buying the overall market at these levels.  I’d rather buy some individual stocks that have been knocked down for reasons other than the market itself, and we did just that last week (see Twitter stream).  I would not touch U.S. small caps at these valuations and given this chart:

The U.S. Small Caps (RUT, IWM):  Russell 2000 U.S. Small Cap Chart (click the chart to enlarge it):  You can see RSI, relative strength, moving down as the index tops.  Looks ready to fall again.  Only a new high above the two rightmost arrows could fix that.

Small caps fail to break out.

The Gold ETF Chart (GLD; click to enlarge the chart): Last week gold firmed up finally.  As I published on 12-01, GLD has seen increases in volume with each thrust up, but needs to move through the 50 day moving average soon or this rally could die right here.  Spot gold played briefly with 1200 and is now back below that level. 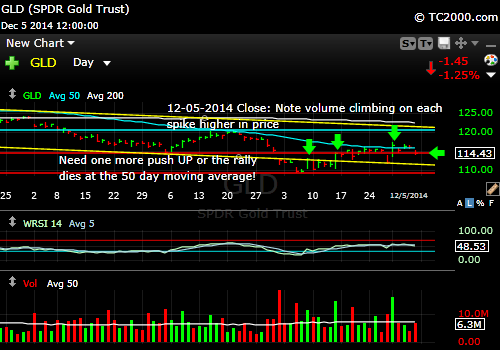 Gold firms up. But must thrust upward once again to overcome 50 day moving average.

The 10 Year Treasury interest rate (TNX, tracked by TLT if Bullish; TBT if Bearish): TLT was working for a bit, but I grew concerned when I saw the negative reaction to the employment numbers, so we exited the trade at a small profit.  High employment would mean the Fed stands aside and raises interest rates eventually, which will cause major losses in the bond market next year if it happens.  Some say there is NO WAY that can happen as long as the rest of the world is either tipping into recession (Europe almost in recession, with parts like Italy firmly in recession and Japan in recession) or slowing (China and to some extent India as well; both are growing, but more slowly than before).  If more signs of worldwide slowing are seen, rates will likely fall once again.  I think the world scene could keep rates range bound for now.  They will fail as an “investment” over the next few years is my guess and also that of Warren Buffett, who runs quite a bit of insurance business and whose job it is to keep track of interest rates and their relative return vs. inflation.  The bond Bulls may still have a year or two left in this trade, but the risk has gone up substantially that investments in long term bonds will fail.

I consider Treasuries a TRADE, NOT an INVESTMENT at these interest rate levels as they are unsustainable over long periods of time unless our economy never recovers its former strength.  The bet is also a bet on the U.S. dollar as it’s an obvious, safe way to hold U.S. dollars.  Safe when rates are steady and even better when rates are falling.  Holding dollars as Treasuries when rates are rising stinks.

Eventually, U.S. Treasuries won’t be sought after and rates will rise rather than fall as they have over the past year, if our economy slows dramatically AND we are no longer THE safe haven in the world.  I admit that this new scenario would take much more time to play out.

Our ability to pay out debt and the strength of the U.S. dollar is firmly linked to the strength of our economy as it is for every country.  Over the short term, U.S. dollars may be sought if we remain a relatively safe bet vs. the rest of the world, but over the longer term, we will have to deal with China as the leading economy of the world.  They have just surpassed the U.S. as the leading economy: China’s Economy Now Larger Than U.S. Economy  You must consider being invested outside the U.S. to access the growth to come as well as having currency protection.  It could take a decade or two for China to fully develop their capital structures, but the Chinese currency, the yuan, will be a dominant currency eventually, and that will pressure U.S. rates as the yuan becomes a new safe haven.

SUMMARY: U.S. small caps have NOT made that new high that is needed, so I still expect a pullback in U.S. stocks, but it could come in January rather than this month.  Mild corrections sometimes do happen in December.  We have no allocation to small caps in the U.S.  Sentiment says this is not the final high.   There is still room above for the SP500 to rally as shown on the chart above.  I think that further rally could happen before year end and then perhaps we pull back in January.

An outside event could also induce a correction earlier.  Right now, things look good for the U.S. and the U.S. dollar keeps rising, making U.S. stocks a safe haven for foreigners.  Gold must rally soon or it will die at the 50 day moving average.   Rates should move up a bit now against the backdrop of very strong employment and even income figures, which we have not seen much of previously, so we’ll stand clear of TLT for now.

We are diversified across the dominant economies in terms of economic growth: the U.S., the U.K. (which has underperformed due to the drag of Europe on it), China, and India.

Note that the newsletter is now closed to new subscriptions, but you can join the wait list for Loyal Subscribers Only: Join the Wait List to Join the Newsletter as a Loyal Subscriber, Opening Just Before January 1, 2015 for a few days.  If you join and don’t read the newsletter, you will be deleted.  Sorry, but I don’t publish to non-readers as other newsletters do.  Stay tuned here in the meantime and follow all the action via the Twitter® and StockTwits® links above.