Market Timing Brief for the 5-01-2015 Close with 5-10-2015 UPDATE: Stocks Falter at a High. Gold Loses Some Luster. Rates Rising But Nearing Resistance.

I deliver extremely FOCUSED comments on the markets.  These are supplemented with “Tweets/StockTwits” (see links below).

Dr. Yellen, our esteemed Fed Chair said U.S. stocks were overvalued in comments she made this week.  The market reacted by rallying much as they did following Alan Greenspan’s similar “over-exuberance” comments.  I am seeking to buy individual well valued companies vs. indices where I can, but I do have index exposure too.  I’ve hedged some of that by selling options, which helps add income even when stocks trade in a sideways manner.

SPX (SP500 Index): Up against resistance already.  Not a great place to buy.  We did some buying just before the jobs report, which was worthwhile (see Twitter®/StockTwits® Links below).  The range is more narrow, so you have to buy the bottom quickly or it just does not pay.

RUT (US Small caps): Better buying position, but lagging the large caps in the face of U.S. dollar weakness.  And much more overvalued than large caps.  We have very little exposure to small or mid caps currently.  Risk works better early in Bull markets than late, because you are making money rather than losing it in declines!  It is called “beta.”  When you buy a stock like LinkedIn that shot up 10.69% on 2-6-2015, know that that “beta” means it can decline that or more (18.61%) on 5-1-2015.  We can’t avoid all such losses, but remember this and you will save yourself a lot of heartache: Risk up means risk down.

GLD: Gold recovered from some recent weakness, but barely.  Not a good bet if the economy is indeed going to improve dramatically. If the economy remains sluggish, gold will do fine as rates resume their fall.

TNX: The 10 Year Treasury hit the March high and fell, so the Bond Bulls may get some traction now.  Falling rates would help gold hang on.

Emerging Markets:  I expect rates to fall for a bit (if not, stand this on its head), which emerging markets (EM) like.  They like loose, plentiful money lending.  I dialed back my China exposure (see Tweets/Twits) to 75% of my usual maximum exposure for EM with 70% in China and the rest in India.  I won’t like China if FXI closes back below the 4-17 low.  I’d like to see proof that the market really believes that the government is going to do something about getting the economy back on track.  Imports were down 16% this past reporting period, which is a sign of slowing.

Europe:  We saw a nice pop in our EWU position on Cameron’s re-election and the British economy is strong enough with a stronger currency now as well vs. the USD.  It’s not a great point to buy this market as it’s at a double top.  I don’t love chasing, but if you have to, this may be one that will work out.  It’s better to buy the pullbacks in Bull trends as we did with the U.S. market this week.

Stimulus by European, Chinese, Japanese, Australian, and other central banks certainly can help U.S. multinationals to grow, but the issue is whether that will be enough.  That’s yet another reason why we are focusing on buying pullbacks.

Now back to last week’s charts…..

Current Thinking and Market Timing:
– German rates rose rapidly this week (last week rates were negative out 8 years for Germany; this week rates are negative out to 5 years), indirectly pressuring U.S. rates.  Our market seems to believe that all is well and the Fed will continually raise rates, but the data does not clearly support that.  Rates are still very low in Europe, despite the move up this week, and the low rates should STILL help out the Eurozone economy.  So we’re staying put (see last week’s post).  If you buy into Europe, I would recommend hedging half of your holdings and not hedging the other as detailed in the prior post.

– China (FXI): Looking toppy, so I removed leverage, which was previously as high as 50% near the top.  We still have 100% exposure to emerging markets mostly via China, but some via India.

– Last week I said: The dollar is looking toppy now (there is a “but” there….keep reading)…”  This week the dollar up trend was broken.  Where it inflects will depend on news flow.

The dollar is saying that the Fed WILL NOT raise rates that soon, or that as it does, inflation will get out of control.  Unfortunately, the dollar/rate signals are not crystal clear as rates are rising as the dollar falls, which one would expect only if A) The Fed were going to steadily raise rates until they hit 4-5% thereby crushing the economy or B) If inflation fears were rising and the Fed were in fact behind the curve as expressed in the bond market.  The data do not currently support the idea of rampant inflation.  The Fed appeared to be on track on the inflation front in 2014, but that fell apart in 2015 as the data here shows: Inflation Stats.

– The Fed cannot raise interest rates any time soon due to its two mandates.  Employment slowed last month, so next Friday’s number is key.  If U.S. employment is too strong, look for a sizable market correction.  Assuming employment remains sluggish, the Fed also has to meet it’s circa 2% inflation goal, which is it not being met.

If you have not yet read the post on what normally happens to the markets when rates rise, please see that post link in the right column.

If you like what you just read, please show your gratitude in a tangible way as many of you do, as in Tweeting the link to this article, writing a comment below that is meaningful, or writing a testimonial in the comments below about how you’ve made money based on my insights.  Thanks for taking the time to do that!

And now the charts for the week:

SP500 Index (SPX, SPY; click the chart to enlarge it): I said I expected the first two red lines to provide support this week and they did. If you look at the overall formation it is an ascending triangle, which is Bullish.  To capitalize on this, the market needs to quickly break out to a brand new high. 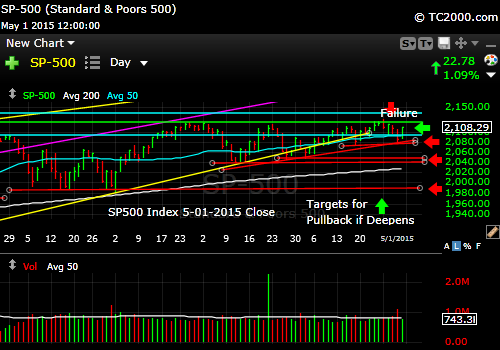 Russell 2000 U.S. Small Cap Chart (RUT, IWM; click the chart to enlarge it):  You can see the up trend break, and the relative underperformance vs. the large caps of late.  Small caps had risen in part based on their relative outperformance vs. large caps due to U.S. dollar strength, which hurts U.S. large cap multinationals more than small caps.  That influence is reversing now as mentioned (dollar down).

Small caps are slipping. Held a support level. Another bounce and slip due?

The Gold ETF Chart (GLD; click to enlarge the chart): (see above and below for predictions): Real interest rates were rising last week with low inflation and rising rates, which always hurts gold.

Gold slipping once again despite dollar weakness on rising rates.

U.S. 10 Year Treasury Yield Index (Please Click the TNX Chart to enlarge it ; see related ETFs: TLT (a 20 year ETF), UBT (2X TLT and TBT inverse 2X TLT): Just when it looked as though rates could keep breaking lower, they reversed UP, but are just about to hit some resistance.  What will support a continuation of this?  A strengthening economy.  Rates will rise if the U.S. economy strengthens and creates more demand, which causing rising prices eventually.  Wages also rise in a healthy economy and stay ahead of inflation.  That is called prosperity, and it does not just touch the top 1%, when the economy is inventive and productive.

If the economy is in fact slowing, the Federal Reserve won’t be able to raise interest rates, and they are likely to fall with further easing measures or persistently low rates. 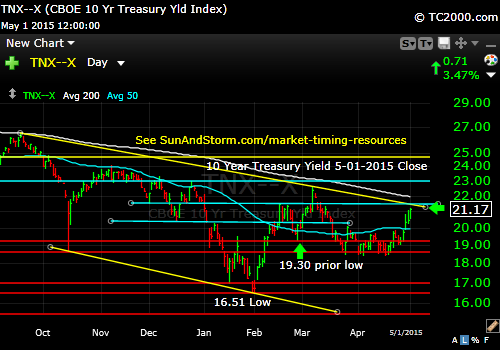 Rates rising again. A yo-yo under a Fed spell.

I cover foreign markets on social media (see links above) and in my monthly newsletter.  Note that the newsletter is now closed again to new subscriptions: Join the Wait List to Join the Newsletter as a Loyal Subscriber, Opening again for the July 5th issue.  If you join and don’t read the newsletter, you will be deleted.  I don’t publish to non-readers as other newsletters do.  Stay tuned here in the meantime and follow all the action via the Twitter® and StockTwits® links above.