1. The Greek default (that already happened this week with the added current threat of a NO vote of the Eurozone offer in the referendum today) has our markets on edge, but what really has them on edge are the soft earnings to come in the next few weeks starting this Wednesday, July 8th.  Realize that Greece is just a distraction to the U.S., as even the European banks do not have most of the exposure to their debt default.  The big institutions have taken on the bad debt to insulate the banks at the expense of others.  This does not say that everything will be find and dandy if Greece goes fully belly up.

The U.S. large and small caps are at support levels, which may only hold for temporary relief bounces, followed by a deeper correction.  The employment figures were moderately strong and the consumer is still fairly happy, so the Bulls say the market has further to go to the upside this year.  (I am fully invested at the moment, but less leveraged to cash than previously, meaning I sell some higher as a practice, and deploy excess cash when the market pulls back to provide a discount – buy lower, sell higher.  You  cannot always catch the exact low, because guessing at that can be dangerous.  It’s also best not to chase markets on strong days; instead, buy them on pullbacks in the Bull move.  We are now getting such a pullback.  How deep it will go is unknown.  I suggest saving some cash for lower lows than the Thursday close.

2.   Gold did NOT respond to Greece and the potential trouble for the Euro, which is negative.  We are on the sidelines as far as a gold trade goes.  If you have no exposure to gold (we are using it as insurance against the U.S. dollar and our Fed’s demonstrated intention to debase our currency in support of “full employment” of course), the best set-up is to add GLD here and toward the deeper lows (109.67-109.77) and sell if there is a significant breach of that low.

3. Interest rates should remain range bound for a while longer given the slowing of Europe and China in recent numbers as well as in the slowing of U.S. profitability.  You could buy near this low in TLT for example, and sell it if it does not hold.  If our economy starts to pick up more strongly, stocks will resume their rally, rates will rise, and gold will be under pressure.

Now view the charts below…

Russell 2000 U.S. Small Cap Index (RUT, IWM; click to enlarge):  Nope. They broke down along with the large caps that led the selling. On some support as you see below.

Small caps do NOT maintain their breakout and fall with large caps.

Gold ETF (GLD): Holding as currency insurance only.  No trade at the moment (see comment above).

Gold slumps as rates form a peak and oil eases from high. 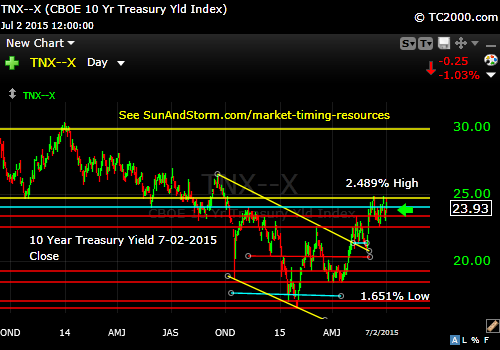 Have rates peaked? Will they now move back toward the lower end of the range?

Note that the newsletter is now CLOSED to new subscriptions: Join the Wait List to Join the Newsletter as a Loyal Subscriber, Opening again for the October 4th issue.  If you join and don’t read the newsletter, you will be deleted.  Why?  I don’t publish to non-readers as other newsletters do.  I surround myself with committed people who value what we are doing.  Stay tuned here in the meantime and follow all the action via the Twitter® and StockTwits® links above.