Gold is breaking up above a resistance level shown (above 110.82) as well as UP and OUT of the triangle that had formed, marked by the orange lines.  These are two Bullish developments.  Add on pullbacks (esp. if you own no gold as discussed below).  And watch out where all those lines converge above this level.  It’s a likely place for a pullback to occur, at least temporarily.

Gold breaking up and out of a triangle marked by the orange colored trend lines.

Now to this past week’s issue…

1.  SP500 Index: Our 2011 Scenario continues to unfold.
We now have a successful retest of a bottom as shown here (SPX SPY; click to enlarge):

The bottom that we have, which is commonly called a W bottom could hold, but that does not have to be the case.  Look at GLD, which formed several bottoms one after another.  Still, the jury that will decide the market’s fate will be earnings, not technical analysis.  (Most companies report after the end of the quarter and the lineup starts with Alcoa (AA) on October 8th, this Thursday after the close).  Technical analysis is just a guide on where to buy and sell to improve one’s odds of booking a profit in the end.

Stocks rise when earnings rise over time, whether those earnings are dispersed as dividends and stock buybacks or debt pay down or not.  They are not directly correlated over short periods of time, but over longer periods of time, they are always correlated, because investors demand that the companies they own make increasing amounts of money or at the minimum, return cash to them at a certain rate to compensate for the risk of owning the business.

Be sure any individual companies you own are accomplishing the above and better than a steady rate of return, are GROWING their earnings over time or at least their dividends.  Why is growth important right now?  Because the economy has been slowing down, so earnings have fallen.  If a company is growing earnings rapidly and those earnings fall a bit, it may not make much of a difference.  So favor growth over value in the near future.

I’ve been using an analogy to 2011 since early August.  The mainstream press and others have since caught onto that insight.  Back in 2011, it took a while before the full retest occurred.  Before that retest there were five shallower tests.  This time there have been just two, but then we did get a nearly complete retest of the 1867.01 bottom at 1871.91.  Does the market need to overshoot that low as it did in 2011?  There are no rules that markets follow like that.  On the other hand, can anyone guarantee that the bottom formed will hold?  Nope.  Anyone who does is foolish.

We merely buy fear and sell greed around here and maintain a core position based on our longer term outlook.  We are long the market to the extent posted on StockTwits/Twitter, and have the ability to exit a portion of our holdings at any time.  Remain flexible, but do your best not to sell in fear at lows!

2. Small caps bounced as well and reversed a prior breakdown, which is at least short term Bullish. 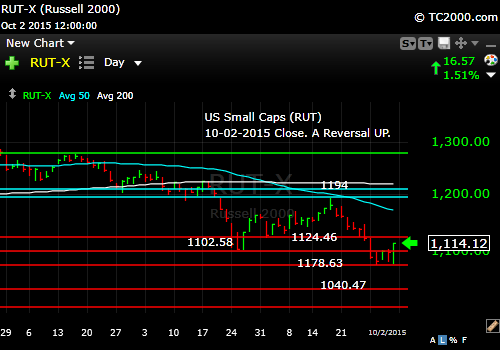 Small caps have an upside reversal.

3. Gold: Gold has two of the things it needs to rally and the third is discussed Here If you have not read about that third ingredient, please do yourself a favor and read it.

The GLD low was 103.43.  That is just 5.1% below here.  It is a trading buy on pullbacks if you have no exposure to gold.  As I’ve said, I expect gold to stay in a range until it is clear that the Fed cannot raise rates even in December, when Dr. Yellen believes she must raise them. For that reason, for those of us with a core long term gold position, it’s a hold until the Fed is convinced it can do nothing.

A close above 109.67, a prior low, is the first step.  Next would be a close above 110.82 and then a close above the downward wedge marked by the yellow lines.  Since the latter two numbers are so close to here, I would not chase the market up.  Buy the dips.

Gold likes low rates and a falling dollar. It has both.

4. Treasury yield: Treasuries rallied nicely and gave me an opportunity to lighten up.  I will likely hold my remaining core position now along with my sizable allocation to municipal bonds.  If you pay 28% taxes or more and you don’t own munis, why not?  Start a ladder and add on pullbacks would be my suggestion.  I suggested buying NIO a while back.  (See StockTwits/Twitter; consider it on pullbacks, but consider the state you are in before you do.  There are funds specific to many individual states. Or stick to individual munis if necessary but be sure they are insured and restrict each bond to no more than 10% of the total you are working toward.)

Rates should continue to fall, or at least stay reasonably range-bound near the lower end of the recent range, as the Fed gradually gives up on raising the Fed Funds rate anytime soon.  The caveat?  I believe Dr. Yellen may feel she painted herself into a corner on a December rate hike, although her “data dependence” does provide her with an out.  Right now, the market is handicapping the risk of a Dec. hike at only 30%, so a hike would shock the markets.  The other question I have about a December hike is whether the Fed will want to mess with Christmas?  Doubt it!  That’s why I believe the markets (including both bonds and stocks) could continue to recover with rates at least staying low in the recent range until 2016.

Watch out in Q1 2016 though.  We’ll be watching the markets to see when they will be forecasting further slowing of the U.S. economy.

I’m betting that the Bears may be wrong about the near term performance of the economy into Q4, but hearing that there are rapid conversions being made on the Bull side makes me want to remain flexible.  If earnings and expectations disappoint, we’ll be back to the prior lows in a flash.

Rates fall, but then bounce from the last support level.