Market Timing Brief™ for the 1-08-2016 Close: What Will Turn This Market Into A Bear? SP500 Index Headed to Test of Support. Gold Breakout Intact with Falling Rates.

1.  SP500 Index: I was correct about the fourth failure of the SP500 Index.  We’ll be back at the Sept. 2015 low if not the Oct. 2014 low fairly soon.  We should see a test of the Sept. low by Monday and that could provide a temporary bounce particularly if there is some cheer-leading from the Fed.  If not, we’ll likely continue lower to test the October 2014 low.

Below the Oct. 2014 low would be a true Bear market revealing itself.  Remember that the August low was a higher low, which is marginally Bullish.  We need to take out a major low of this Bull market to call it a Bear.  The October 2014 low is the true Bear Prize.   The percentage rules people have for Bear markets were fulfilled in 2011 (over a 20% fall; 21.6%) and yet the Bull market continued.

The October 2014 low using intraday values (more extreme at top/bottom) is ‘just” 14.7% below the all time intraday SP500 Index high.  That’s enough for me though to call the market a true Bear, one that has clearly changed direction to going DOWN.  It could also be argued that a close below the Aug/Sept lows would define a Bear market and the losses there would be lower still.  Longer term investors could start dumping stocks on a close below each of these major lows. 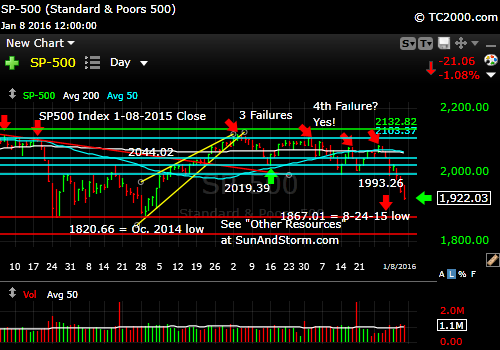 2. U.S. Small caps are crashing much faster (higher beta) than the SP500 Index.  Stay away.  Stick with safer large caps with growth prospects and financial stability. 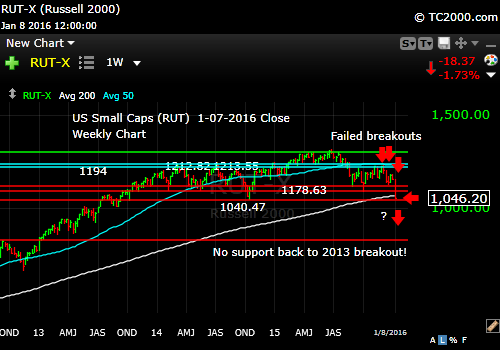 3. Gold has completed the 3rd day of a major reversal to the UPSIDE (defined as being above 103.43 on the chart below; red line).  It is a trading buy as long as the breakout holds.  Use a stop on all new positions.  If you won’t use a stop, please don’t buy gold unless you have no exposure to it.  Sell if it falls below the red line even on an intraday basis.  It SHOULD rally from here unless the market is not clear on the trade, and if it’s not clear, I don’t want to have additional gold exposure! (I am holding ONLY profits from buying gold in the high 300’s, so I have no need to sell.  I reclaimed my entire principle at a gold price of around 1370 on the way down.)

Gold is finally acting better, but dollar strength may be in the way.

4. U.S. 10 Year Treasury Note Yield (click chart to enlarge; TNX,TYX,TLT,TBF): Rates should keep falling as the Fed is moving in the wrong direction.  The more they tighten the Fed funds rates, the better it gets for long bonds.  Eventually they’ll invert the yield curve if they stay on course to raise rates up to 4 times in 2016. 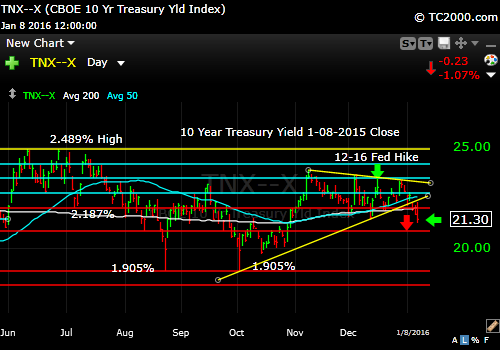 What to look for?  If TNX trades above that lower yellow trend line, lighten up on longer bonds.  The market should be convinced now that the Fed has done the wrong thing.  If they are NOT convinced, then bond performance will stink, and I will want to have less exposure to them.