UPDATE 6-30-2016 after the close:  Now that we’ve reached the realm of the target I had in mind for this bounce (see Twitter/StockTwits links below), what do our market timing parameters tell us?

1. As just tweeted, the rise in the SP500 Index has been a bit too fast.  Fast up often leads to fast down or at least to a correction.

2. What does the volatility index say?  Is there room for fear to fall much?  Yes, as you see below the VIX has room to fall further (the blue haze represents a plot of the Bollinger Bands for the VIX, which gives us an idea of the potential movement in both directions):

Room to fall further even if there is a pullback.

3.  Given the whippy move in the markets over the past 3 days in our climb from the first Brexit low (see that here: Hard Bounce UP, I would lean toward there being some sort of correction of at least 1/3 to up to 2/3’s of the rise we’ve seen.  That said, I believe a 2/3’s correction would bring us back to prior lows or lower.  The market is a bit jittery still.

If you are Bearish, now’s the time to scale out of some exposure and then scale out of more if we should go still higher.

Remember that the VIX tells us there is room for fear to fall, which means the conversion of more Bears to Bulls.  Investors have not fully calmed their nerves yet, which can propel the market higher.  It also means that they are overly sensitive to negative news cropping up around Brexit.

Conclusion: Given the rapid ascent, my favored scenario would be a 1/3rd pullback followed by a push to prior highs.  Check my exposure levels on the social media feeds (links below), and consider how you will adjust yours in way that fits your own investing/trading plan and your beliefs about the market and economy.

Returning to my comments that preceded the Monday slide…

1.  SP500 Index: There is no way to do market timing of certain events such as Brexit, which was unexpected by most of the market, but we could have had and did have positions that hedged our stocks such as a large gold as well as a large bond exposure through municipal bonds.  We also were not overly leveraged to stocks.

Both gold and bonds rallied as stocks fell hard after Brexit (the referendum for the UK  to exit the EU) was passed in favor of the “leave the EU” crowd.  The British Parliament still must ratify the results of the referendum.  The Brits have committed temporary financial suicide in exiting the EU which is likely to impose some level of punitive damages upon the U.K. as it seeks to renegotiate the terms of its trade agreements with the European continent.  It has to make up for the financial losses of the UK’s prior contribution to the EU.

I expect a lot of jawboning this week particularly from our Fed, which just can’t seem to keep it’s mouth shut in the first place.  Fed blabbing is far too tempting at this point as the markets could spin further out of control.

Votes are being collected for a re-referendum in the UK.  After all, fair is fair and the Brexit crowd was already threatening to demand a redo vote prior to the completion of this week’s Brexit vote, as they were anticipating losing the 1st battle.

This is the problem with referenda: they amount to the abdication of leadership by those chosen to lead, or I suppose you could call it giving up their power in favor of the people, who are swayed by the emotions of fear and greed.  Would you seriously want the average voter to decide on a nation’s trade agreements and immigration policy, when they have not even studied the issues in detail?  Some do obviously, but in the US at the Federal level there is no such thing as a referendum for this precise reason.  The majority very often wants to rule in its own favor, despite the consequences to the nation both economically and ethically.

What we can expect is greater uncertainty for months to years in Europe, so risk is now elevated for more downside stock market action, but the inherent momentum of those slowing economies was probably enough to bring them down over time in any case.  This was simply the market’s excuse to accelerate another fall.

Shorting markets that have just fallen a good way is fraught with difficulty too as is deploying our excess cash too quickly.  We’ll be patient and see if the SP500 Index 2020 to 2026 band of support works for the Bulls as we attempt to market time the next low as best we can.  If it does not, I believe we can expect far more pain before this move ends.  If we buy more at any given level, we will save some cash in case prices get even better.

It must hold nearby support or expect much more downside.

Survey Says!  Sentiment this week among individual investors (AAII.com) showed a Bull minus Bear percentage spread at minus 13.2% this past Wednesday (Bulls 22.0%% and Bears 35.20% with Neutrals a Bullish 42.8%% [over 40% Neutrals is Bullish for market timing 6 months out]).  It will be interesting to see what damage Brexit has done to U.S. investor confidence.  This survey was concluded the evening before the Brexit vote started coming in.

2. I repeat: U.S. Small caps are STILL above the 1040.47 level that for me defines a Bear market transition point.   Time will tell whether the small caps will head back into Bear market territory, but given their lack of earnings, we are staying clear of them. 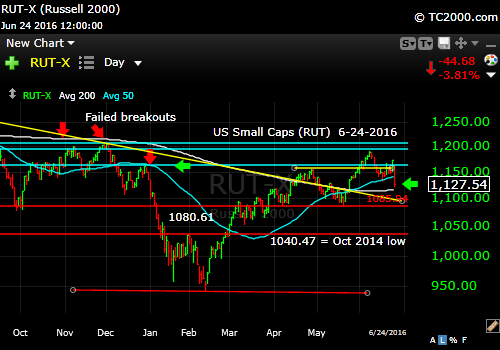 Small caps will fall farther than large on the way down. That’s how it works. It’s called “beta.”

3. Gold: Gold broke up and out and can make further progress, but I would expect some consolidation (sideways move) over a few days.  Note the green arrows by the big green volume spikes and you’ll see why I say that.

I’m glad we stuck with our gold and gold stock positions despite the press saying that Brexit was going to be defeated (see Twitter/StockTwits feeds at the links). The dollar moved up with gold as it does normally during financial panic.  Thank you gold for doing your job for us! 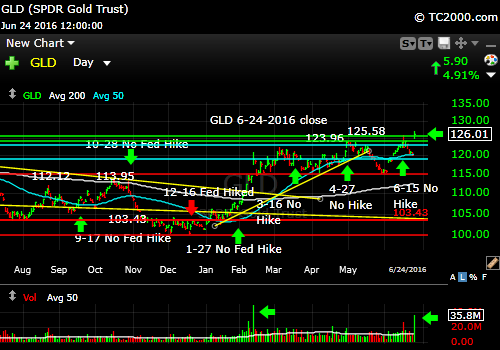 Gold shines when there is financial panic, and we were ready for it.

4. U.S. 10 Year Treasury Note Yield (TNX): We saw yet another retest of the lows following the British vote, but things will look far worse to the Treasury and equity markets if we arrive at new lows, so keep track of the 10 Year Yield this week!  Remember that rates RISE in a solid economy.  Well, you can forget a July rate hike by the Fed now.  It’s off the table.  New lows in yields mean more economic trouble is possible. 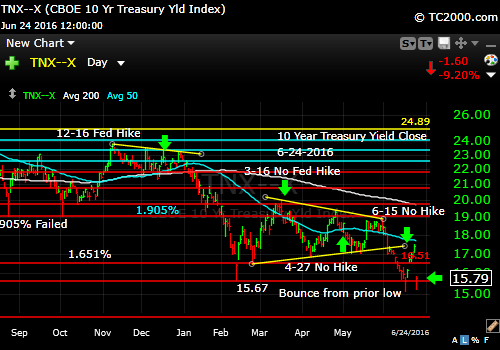 Bouncing again from the prior lows. We’ll watch for lower lows.