I closed out my Russell 2000 Index small cap short fairly close to the bottom today at 119.22 (low was  119.10), close enough.  It is not that I don’t expect a greater pullback; it is that I am trading a short against buying strength/weakness and my signals said to cover.  It is definitely an art, but the signals help to get me into the ballpark frequently (not always).

Here is what the break in the SPY looked like today. We fell to the bottom of the recent consolidation band, so the next break could be bigger.  I realize it’s hard to see on the right exactly where we are, but the close was JUST ABOVE that top red line.  If this support does not hold, the next support is the band of support lines that span the range of about 211 to 212.5. (those lower three closely spaced red lines that are almost blurred together): 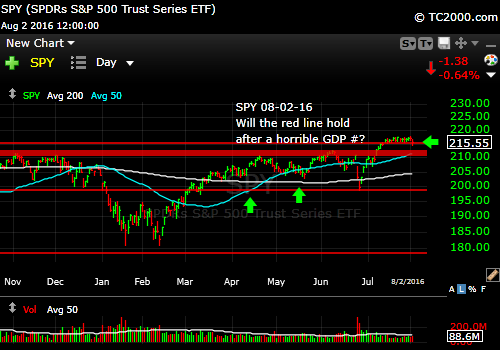 …now back to my recent report…

1.  SP500 Index: Please read my update made in the prior issue about the Fed statement.  I won’t repeat that here.

You cannot use market timing safely until you figure out the economy.  Not safely, and not intelligently either.  The Bureau of Economic Analysis (BEA) which announced a first estimate of Q2 GDP that was 1.2% vs. the 2.6% expected per Bloomberg News has been playing with the books, just as many companies play with Non-GAAP vs. GAAP earnings, the latter of which takes all charges into account, while the former does not.  If a company decides it will take a charge on a bad investment, it can basically hide the error by including it in the non-GAAP earnings number.  There are other expenditures that reduce earnings temporarily, but which result in increased sales and earnings down the road.  That’s fine, but it’s important to know where a company screwed up.

In a similar way the BEA decided to use a small deflator when GDP was weaker in Q1 and now use a larger deflator in Q2 when GDP was on the hot side, thereby smoothing out the results.  It makes it tough to predict what the market’s reaction to a given economic number will be when the books are cooked in this way.  Some contend that Q1 would have been recessionary (the first quarter of two required for the formal definition of recession) had the proper deflator been used.

Here are the important numbers:

Remember that GDP is the seasonally adjusted annualized rate of growth of the economy.  It is an attempt to project the current rate of growth forward for a year.  “Real” means inflation adjusted and that is the big number that is always reported first.  Current dollar (non-inflation adjusted) GDP was 3.5% in Q2 2016 vs. real GDP of 1.2%, while Q1 was revised to 1.3% in current dollars vs 0.8% real GDP. The ratio between real GDP vs. current dollar GDP in Q1 vs. Q2 showed a HUGE difference: 0.34 now vs. 0.62 then.  In other words, GDP was “marked down” by inflation much more for Q2 than was done in Q1.

The excuse is that they claim inflation shot up in Q2 vs. Q1: “The price index for gross domestic purchases increased 2.0 percent in the second quarter, compared with an increase of 0.2 percent in the first.” 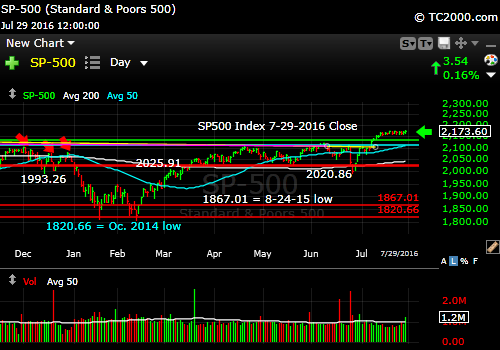 Survey Says!  Sentiment this week among retail investors (AAII.com) showed a Bull minus Bear percentage spread that went down even more than last week +2.84% [over 40% Neutrals is Bullish for market timing 6 months out]).  At these levels there is plenty of room for sentiment to go in either direction, BUT the neutrals have the ball for the 6 month point.  The odds according to AAII’s data of the market being higher in 6 months is better than 80%.

It seems popular right now that the market is going to go down a bit and then rally later on perhaps after the election.  Instead of guessing we will follow the market!

2.  U.S. Small Caps: Small caps moved a bit higher against my short position, but failed to make a new high at the end of the week.  I still believe they will underperform large caps in the slower economy. 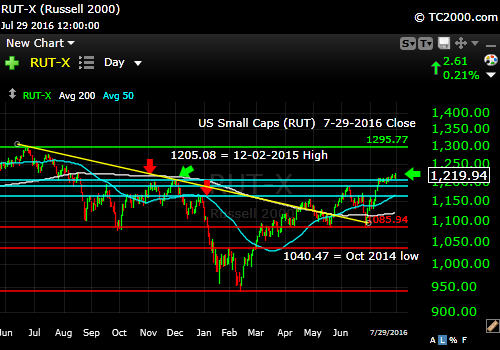 3. Gold: I bought more gold on the pullback as said and trimmed some mining exposure a bit early prior.  I did book a healthy profit on GDX and a miner option combination.  Fortunately, I kept my GLD.

Remember that gold will have problems if one of TWO things happens: 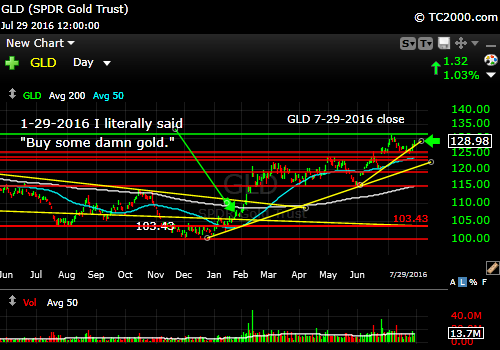 Gold bounces nicely from our “add.”

4. U.S. 10 Year Treasury Note Yield (TNX): U.S. 10 Year Treasury Note Yield (click chart to enlarge; TNX,TYX,TLT,TBF): The 10 year yield broke back below 1.567%.  This is very bad for the banks and insurers.  Avoid them.  Rates are going to stay low for many months most likely.  That does not mean there is no “rate risk” to bonds.  The rubber band is stretched to the downside. My opinion is that negative rates would be a horrible idea. 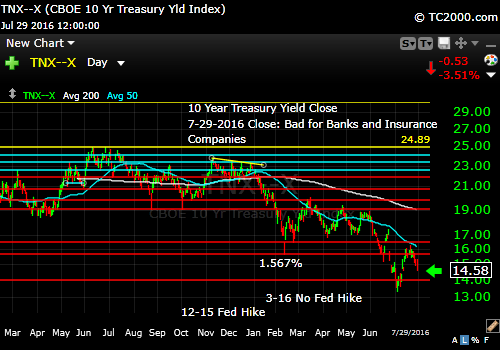 Rates plunge on weak GDP, much worse than expected.

Note that the newsletter is now CLOSED to new subscriptions: Join the Wait List to Join the Newsletter as a Loyal Subscriber, Opening again for the October 2nd issue. If you join and don’t read the newsletter, you will be deleted. Why? I don’t publish to non-readers as other newsletters do. I surround myself with committed people who value what we are doing. Stay tuned here in the meantime and follow all the action via the Twitter® and StockTwits® links above.