Market Timing Brief™ for the 3-24-2017 Close (UPDATE for Small Caps 3-30-2017): Big League Failure by Trump Administration on Health Care and Stock Market Doesn’t Care (so far). Trump to “Pivot.” Gold and Rates Both Leaning Toward Failure of Trump Growth Plans.

Small cap stocks held market timing support at the bottom of the range just as suspected (we bought very near the low as documented on StockTwits/Twitter – links below).  We’ll have to see how they behave as we approach that top.  Stay tuned on social media for further trades. Remember that small cap stocks are generally not as exposed to the border tax issue unless they import a lot of their products/inputs from abroad of course.  Look at all your stocks from big to small and consider selling them if they are overly exposed to Trump policies and consider moving the funds to a broad index instead.  I’m staying long this market until things say otherwise, but no need to have the wrong exposures. 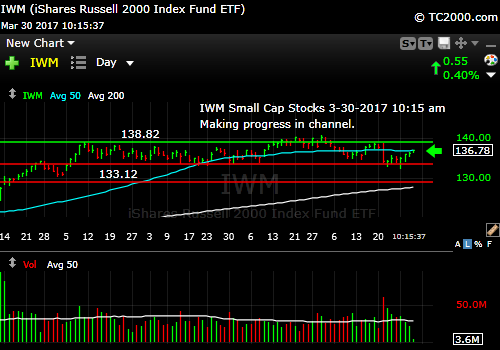 1.  SP500 Index: Trump’s AHCA Health Care Plan blew up along with Speaker Ryan’s leadership resume on Friday, when the Republicans could not herd their cats to pass a bill to kill Obamacare, something they had already passed many times over seven years.  It was a colossal defeat and may make the market nervous about tax relief and other Trump plans.  He will have to develop more consensus on tax cuts or he can forget passing much of anything going forward.

Democrats found themselves backed by of all things “the People,” who called in massive numbers to express their opinions and jeered at town halls to push back on AHCA.  They won…big league.  The People have spoken.  They want other Americans to have health care coverage, even when they cannot afford it, in greater numbers than those who think “you should take care of yourself” whether you can or can’t.  There were only – get this – 17% of people who wanted the AHCA bill to pass.  Need more polls?  It was a horrible bill no one liked, not compassionate conservative Republicans and not Freedom Caucus members who want to throw medical care issues back to the states (which would make some states targets for migration. It’s an impractical idea in the national context).

The GOP is fractured and the Democrats are unified.  That does not add up to progress unless Trump works with Democrats, which I predict he will now do.  He’s going to pivot to win again.  After all, consider his history and you’ll realize that beyond gun control and military expansion, he’s more of a “Bloomberg-type Republican.”  He has said he is for providing “health care for everybody.”

Trump also claims he will help the middle class more than the rich, although that remains to be proven, considering the huge $883 Billion of savings for the rich in the now failed ACHA Health Bill.  But Trump is all about winning, and Republicans burned him, so here comes the big pivot in my view.  He will leave the Freedom Caucus in the dust and work with moderate Republicans and Democrats to get things done.  Remember even the Freedom Caucus will love his military plans.  He’ll pass infrastructure plans with Democrats and moderate Republicans.  Get the picture?  It’s a whole new equation.

Continue to follow my 3 signals defined in early February HERE.

Keep up-to-date during the week at Twitter and StockTwits (links below), where a combined 25,786 people are joining in…

Testing 50 day moving average and deciding on the economy’s prospects.

Survey Says!  Sentiment of individual investors (AAII.com) showed a Bull minus Bear percentage spread of  +4.78% up from -7.53% the prior week.  Market timing believers should still be long, as we’re near the highs and optimism is FAR from it.

2.  U.S. Small Caps: I opened a position in small caps for the first time in a while based on the belief that the market had reached an inflection point.  At such a point the higher the “beta” you own, the better the market timing bounce on the turn.  I’ve previously shared why I favor midcap stocks over longer periods of time.

I may reduce exposure by dropping small caps at an upcoming high. This all assumes that the market still finds some belief in the near to intermediate term prospects of the economy, which I currently favor. 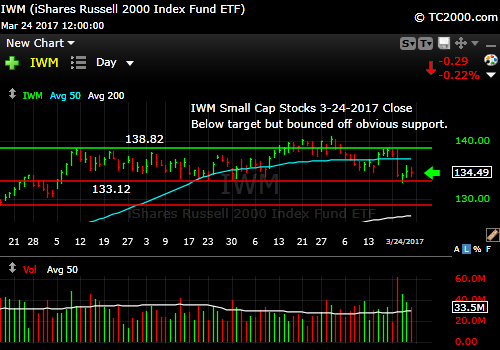 Coming off bottom of the range.

3. Gold: Gold has bounced from a retest of the 115.00-115.20 target range, which means it’s forming a reverse head and shoulders, a Bullish market timing signal.  Gold believes “Trump Growth” is in trouble and rates will stay low, and rates have in fact moved lower.

This correlation will stand on it’s head and wake up market timing experts if and when it ever buys “Trump Growth” again.  Why?  Because rates rise when growth is robust, not when it’s marginal.  Does this mean that the Fed cannot raise rates a bit more?  No.  They can hike rates as long as doing so does not slow the economy to a crawl.  Stay tuned to this battle of rising rates vs. growth, because it will be with us for many months.

Gold in reverse head and shoulders. Points to inflation.

4. U.S. 10 Year Treasury Note Yield (TNX): We had a test of the 2.621% high and of the 2.489% breakout.  We’re now below both.  “Trump Growth” that goes beyond the already established growth trajectory (even with its bumps of falling earnings this past year), of about 2% a year is what rates need in order to rise.  Two percent growth is all the Fed sees as it gives no credit to Trump for “possible growth.”  The Federal Reserve’s public messages have been clear: “Show us the growth.”

Rates are down wondering about “Trump Growth.”

Thank you for reading.  Would you please leave your comments below where it says “Leave a Reply”… or you should also feel free to ask a question…

P.S. I am closing subscriptions to my private, now monthly, no cost newsletter on March 31st, and may not reopen it until the end of the year for the January 1st issue.  If you want to become a “loyal reader,” this will be your last chance for a long while… Click the link below if you are interested.

Note that ALTHOUGH my newsletter is now CLOSED to new subscriptions… you can Join the Wait List to Receive the Newsletter as a Loyal Subscriber, Opening temporarily for the April 30th issue (LAST DAY TO SIGN UP is March 31, 2017.  The newsletter won’t reopen until end of December at earliest)

Click HERE to Sign Up.  Note however that if you join and don’t read the newsletter, you will be deleted. Why? I don’t publish to non-readers as other newsletters do. I surround myself with committed people who value what we are doing. Stay tuned here in the meantime and follow all the action via the Twitter® and StockTwits® links above.

2 Responses to Market Timing Brief™ for the 3-24-2017 Close (UPDATE for Small Caps 3-30-2017): Big League Failure by Trump Administration on Health Care and Stock Market Doesn’t Care (so far). Trump to “Pivot.” Gold and Rates Both Leaning Toward Failure of Trump Growth Plans.