1.  SP500 Index: My three signals for a further rally in the stock market are mixed with one signal, the stock signal, in the OFF position, and the gold and interest rate signals ON although nearing their respective switch points.  It’s not that the small caps are behind the large cap stocks since the election.  They are not (see chart below the SP500 Chart).  The issue is there has been no progress by the small caps since the intraday high of Dec. 9th.  Remember that given their higher risk vs. large cap stocks, the gains must be more over time.  They are ahead of large caps since the pre-election low as they should be, but the gap is closing.

The stock signal is OFF with the S&P making new highs, because it is based on the Russell 2000 making a new high above the trigger level (see chart for the number).  It is a measure of market breadth.  There have already been two failures to stay above that level, so it certainly is seen as an important market timing zone for the market.

The small caps are more sensitive market timing predictors and predictors of the health of the overall market than are the large-cap stocks, because when the small-cap stocks start to break down, there is a rotation into the larger names for a period before they also break down. Either that happens or new highs are achieved in all three groups of stocks, namely, small, mid, and large caps.

The tentative nature of trading in the small caps versus large-cap stocks, tells you that the market is not completely sure of the direction it is taking.  Of course, the stocks don’t know any thing of this but their owners do!

One of the things that has been sustaining the rally is the LACK of overly exuberant sentiment. Despite the high prices in the market versus their relative pricing over time, there is still very little interest in the market given these high prices (see this weeks’ numbers below).  Normally near, or at in the case of the S&P 500, all-time highs, sentiment peaks. Instead it has been mediocre at best.

In political terms, the market remains confused about whether Trump will be successful in instituting his policies, or whether he in fact will be thrown out for colluding with the Russians in the election. There is no proof that those things have happened despite his very public statements of encouragement to the Russians to interfere in the election by hacking the Democrats emails.  Those statements were wrong for sure, and he’s paying for them now.  No foreign government should be encouraged to hack our elections.  It’s not a joke, even if he meant it that way.

Keep up-to-date during the week at Twitter and StockTwits (links below), where a combined 27,385 people are joining in…

IWM (small caps) have not made a new high since December 9th.   Both the midcaps and the large caps have made such gains, even though they trail the overall gains of the small caps since the pre-election low (the midcaps are winning since the 2009 low though, which is why I’ve favored them in setting my exposure levels).  The small caps need to continue their out-performance now as they are riskier.  If not, the entire market will be in danger of falling. 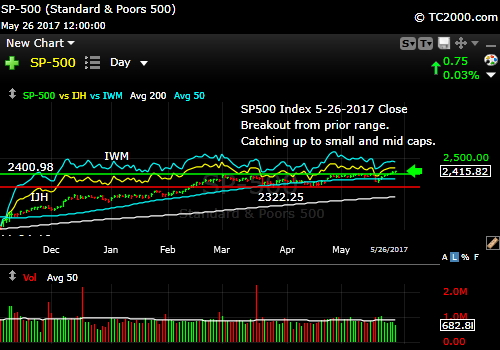 Survey Says!  Sentiment of individual investors (AAII.com) showed a Bull minus Bear percentage spread of  +2.86% vs -10.40% last week.  Still not enough Bulls at brand new SP500 Index highs!  More gains are left.  Even if you miss selling before a market timing correction, you’ll be able to increase your exposure lower and sell at new highs in my opinion.  I’ve already told you how much the market would fall should there be an impeachment (see last week’s issue; link to upper right).

2.  U.S. Small Caps: Small caps were discussed above.  As long as the economy continues to improve, they should finally make new highs above that Dec. 9th high.  If not, large caps will start reversing market timing breakout gains, and we’ll move into a correction. 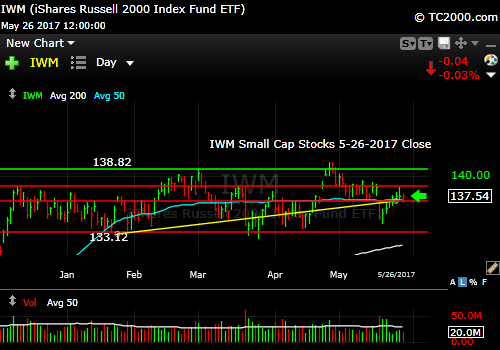 Small caps still with no new high that has stuck since December.

3. Gold: Gold is bouncing as rates resumed their fall, and this week they were testing a new high above market timing resistance. The trigger point if breached to the upside means stocks are likely in trouble.  Remember the gold signal can trigger and indicate “growth with inflation” running ahead of Fed action, but rates MUST rise if the recovery is solid.

4. U.S. 10 Year Treasury Note Yield (TNX): Below that orange line, the “Trump Rally” comes back into question.  We’re getting close!

MY SIGNAL SUMMARY for a Further Trump Stock Market Rally is:

Stock Signal OFF, Gold signal ON, Rate Signal ON.

Again, these signals are close to their switch points and all three must be confirmed to say the stock market rally is back ON.

Rates are moving in the wrong direction for a strong continued recovery.

Thank you for reading.  Would you please leave your comments below where it says “Leave a Reply”… or feel free to ask a question…