Market Timing Brief™ for the 7-21-2017 Close: SP500 Index Near All Time High. Gold and Rate Dance May Change Direction Soon.

1.  SP500 Index: Companies that had being doing well are holding up through earnings and some that were not doing as well, such as IBM, continue to be troubled.  Thus far, 97 companies have reported Q2 earnings.  This summary shows you where the greatest growth is in both earnings and revenue for the second quarter: HERE

On the 28th, we’ll get the first estimate of GDP for Q2, which could be between 2% (NY Fed) vs. 2.5% (Atlanta Fed), but don’t bank on those numbers, as they are unreliable historically.  They may get lucky.  A much stronger GDP number than expected will be taken as a positive reading on confidence in the Trump administration, which has been under pressure with the Russia investigation and delayed action on health care.

In market timing terms, the SP500 Index continues to make new highs against a backdrop of investor skepticism, which means there is room for a further rally.  I will continue to stay with this rally until the economy turns, the market timing technicals turn, or both.

Keep up-to-date during the week at Twitter and StockTwits (links below), where a combined 28,868 people are joining in…

Survey Says!  Sentiment of individual investors (AAII.com) showed a Bull minus Bear percentage spread of  +9.67% vs -1.39% last week.
Bullish sentiment does not generally peak out here and is likely to move to 20-30% before the Bull becomes tired again.

2.  U.S. Small Caps: On the negative side, the small caps failed a breakout above a recent high, but on the positive side, they remain well above the orange market timing trigger line we were observing.  My IWM sell on a small pullback turned out to be premature, though my exposure to equities is still quite high.  There was not enough of a drop to make a re-entry IWM trade worthwhile.  It could be that this failed breakout will just be a minor retest of the late April high.  Remember I put my chips in the large caps and mid caps for the longer haul and use the small caps as a trading position. 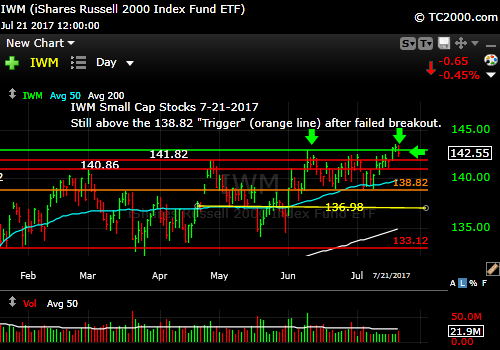 Small caps fail a breakout but above trigger line.

3. Gold: Gold is moving in the opposite direction of rates.  Keep track of the market timing of rates if you want to know when to exit a trading position in gold.  It’s possible that GLD will reach the April and June highs before this move ends, and the 10 Year Yield will move down to the June low.  It is also possible the 10 Year will respect the orange trigger line and bounce (see below).  Rates are the dog, and gold is the tail, regardless.  I own gold for insurance only, because as the economy improves, rates will rise eventually and pressure gold, which has a yield of zero. 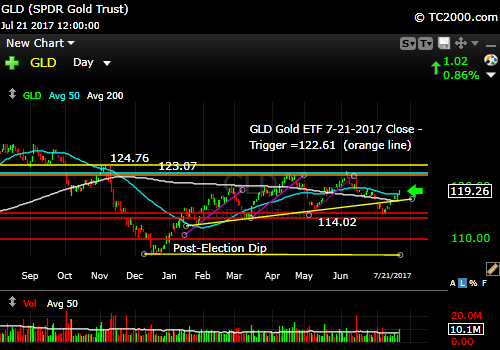 Gold in steady up trend with rates in steady downtrend.

4. U.S. 10 Year Treasury Note Yield (TNX): Rates are falling again.  Inflation is still reasonably contained and GDP growth across the world is a bit sluggish.  A stronger economy would lead to higher rates sooner.  The move in rates may be about done here. You can see how rates have respected my market timing “trigger line” a few times already. It’s possible that rates will bob up and down in a fairly low trading range for the next 6 months to a year, perhaps longer. Testing the June low is possible as mentioned above. Remember this decline hurts the financials (XLF). 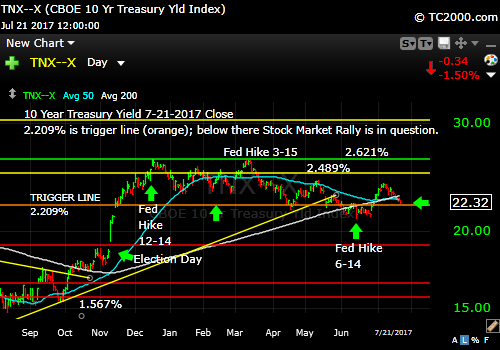 Rates dropping when the market had been expecting gradually rising rates.

MY SIGNAL SUMMARY for a Further U.S. Stock Market Rally is: