Market Timing Brief™ for the 1-12-2018 Close (1-17-2018 Bitcoin Update): Trumponomics Being Priced In. SP500 Index Breaking Out Again. Small Caps Keeping Up. How Gold Can Beat Stocks in a World of TrumpFlation.

The most generous trend line I’m willing to draw is shown in the chart below.  Bitcoin must hold this market timing trend line or else the damage increases dramatically beyond the already impressive drawdown off the high. Manage your risk accordingly. Remember however that a test below a line does not mean the break will hold.  Sometimes it takes a few days to see if a certain level or line will hold the trend.  If you are selling, you may want to sell in stages.  If you are buying, buy in stages and exit if the level you bought at breaks.

Bitcoin must hold this trend line.

And now back to this week’s analysis of the markets…

1.  SP500 Index Market Timing: We are at another brand new shiny high in the SP500 Index this week.  This has created another breakout above the new prior HIGHER channel after the 11-30-2016 breakout.  Part of this was a “reset” as I’ve called it due to the one time implications of repatriation AND lower tax rates.  The question is whether the second higher reset will stick or not. Eventually markets will have priced in the higher earnings reality of the tax bill.  This may take some time, and this means we cannot rule out even higher resets in the US stock market.

The reaction to the Big Bank earnings on Friday was positive, as the XLF financial component to the SP500 Index rose a market-beating 0.90% while SPY rose 0.65%.  Bank of America (BAC) rose a big 1.73%, anticipating good results this coming Thursday when they report earnings.

The expected deceleration of earnings growth in tech that I’ve mentioned previously could provide some bumps, although growth in tech earnings will be continuing throughout the year.  Yes, that means growth occurring at a decelerating rate through part of the year.  The actual deceleration won’t come out until the April earnings reports of Q1 2018. What tech companies are about to say could change things.   If weaker than expected currently, this could mean tech falters a bit while other sectors pick up the lead, including the financials, health/biotech, and energy (unless oil corrects from the current extended levels).

Won’t U.S. growth slow as China slows?  There was a growing consensus that China was going to slow substantially in the “old China” sectors in 2018, and yet the A and H share ETFs have broken out to new recent highs.  I remain invested in “New China” via KWEB mainly, but exited the A and H shares too early (for 18.75% and 15.43% profits w/o dividends, respectively).  Although there was both technical weakness in those markets and fundamentals that confirmed a slowing, the markets now disagree, and so now my job is to re-enter on pullbacks.  The risk was early re-entry on strength only to see the markets roll over once again.  Yet the early cue offered was the initial technical recovery of the markets.  The new definitive market timing signal on the Chinese markets are the breakouts which confirm, for now, the up trend is intact.

Chinese data is always looked at skeptically, and yet these numerous macro calls were made based on such data.  The Chinese government says they’ll grow at about 6.5% for the year, far above U.S. growth, which is headed to lifting above 3%.  China may be slowing marginally, but is still apparently growing.  The macro China Bears are wrong for now, so says the ultimate arbiter, the market.

Keep up-to-date during the week at Twitter and StockTwits (links below), where a combined 33,300+ people are joining in… 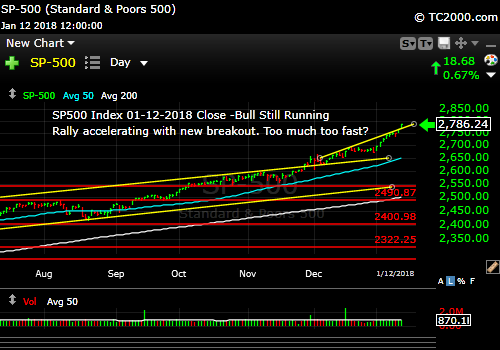 Survey Says!  Bullish sentiment fell somewhat this week as I expected, given the last extreme.  Sentiment of individual investors (AAII.com) showed a Bull minus Bear percentage spread of  +23.60%  vs. +44.2% last week. Review last week’s data or you won’t be prepared for the next correction – see the data HERE.  A correction is coming, and we’ll be watching for signs to “lighten up” a bit, so we can take advantage of the sell-off by buying low again.

2.  U.S. Small Caps Market Timing:  Small caps, as the next chart shows, have been leading since the 2016 Election low, despite the long pause over the 6 months from late 2016 to 2017.  SPY is shown in yellow in the chart.  You can see that buying the pullbacks of IWM toward the SP500 Index were fruitful.  We will be looking for those entry points.  My bigger exposure in my core portfolio to the small to mid range, as I’ve said, is IJH (midcaps).  I have added exposure to IJH over several years and have not traded one share. 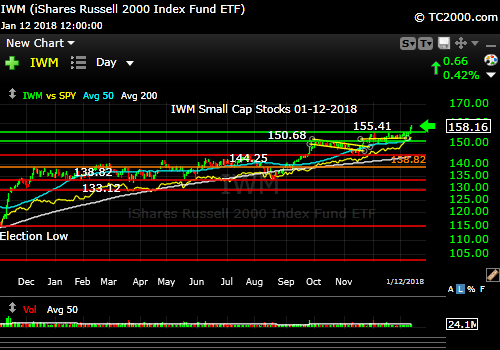 Here is the chart of more recent price action. We are two days into another breakout.  It often takes 2-3 new highs to confirm such a move.

3. Gold Market Timing: Gold is still lagging the SP500 Index since the 2016 Election, but it’s doing better than one would think in an economy that is growing with low inflation.  This must mean that the market is anticipating greater inflation than is now being reported.  Otherwise, holding gold in greater quantities does not make sense.  TrumpFlation is on its way is what the gold market says to me.

Asset inflation alone does not mean higher gold prices as we saw with record low gold prices of 251.70 in late August 1999 preceding the tech crash of 2000.  This tells me the markets are anticipating higher inflation.

This is what I call “TrumpFlation”: Fiscal stimulus in the form of tax cuts in an economy with low unemployment leading to inflation.  The best you can say is that gold rising with stocks represents asset inflation, which invariably leads to a collapse of much greater magnitude than would otherwise occur.  Bubbles pop!  A non-bubble becomes a bubble with enough inflation as rates rise rapidly and bonds compete with stocks for better returns.  Gold will work if inflation in fact increases significantly ahead of Federal Reserve action.

An aside on oil (I chart oil at least once but often several times a week on social media [links above]): Oil prices confirm TrumpFlation at the moment despite the fact that oil speculators have gone way out on a limb in being “Uber-Bullish.”  They are all leaning to the Bullish side which usually portends the failure of a rally.  As oil has gone much further than expected, let the market tell you when oil will finally, substantially correct from its current madly Bullish up trend.  The “oil gurus” cannot.

Here you can examine the current important levels. The trend is UP, but GLD now needs a new market timing high above that top green line.

4. Interest Rate Market Timing – U.S. 10 Year Treasury Note Yield (TNX): Yields rose even further, so I am now back up to 75% of my total financial exposure (in excess of that held in SPY and IJH).  I decided to use XLF exclusively, but suggested adding back Bank of America as well if you wanted greater “beta” in the up trend.  (I sold BAC for 10.00% gains just before the Fed rate hike.)  Higher beta simply means higher returns in a financial sector up trend and losses in a down trend.

The last three price points on the chart below are not particularly Bullish.  You can see the level of 2.621% is not luring in enough buyers.  Pushing through there after these last three days would be impressive.  A reversal here back below the prior breakout would be negative for financials. 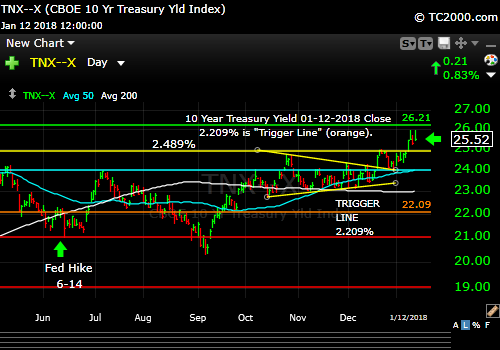 Gold Signal OFF (GLD is ABOVE the “Trigger line” which is positive for gold, and usually worse for stocks unless there is inflation moving faster than the Federal Reserve response to it.  Then it’s gold up, stocks down.

Rate Signal ON (10 Year Yield ABOVE the “Trigger Line,” good for stocks, not bonds).

Note: My monthly newsletter is now CLOSED to new subscriptions.