I deliver focused comments on market timing once or twice a week.  These are supplemented with daily “Tweets/StockTwits” (see links below).  If you are not interested in bitcoin, see my latest post by scrolling down to the SP500 section HERE. Thank you.

If it breaks UP, it can go much, much higher, but if the line holds, BTC can crash back to the lower market timing trend line or worse.  The last time it overshot at the low end.

Must keep going up through that top line or else…

Back to the main issue….

Bitcoin is now once again going down, but could go straight up from here.   That is the uncomfortable truth about the chart, which is still in a market timing down trend despite what seems an enormous bounce from the recent low to around 9,000 (on Bittrex; prices vary across exchanges).  We are back down to 7911 as I type this.  The “positive” aspect of the recent crash in value (of which bitcoin has seen many) is that it’s in a downward wedge, which is normally Bullish.  But it’s also true that the base of the wedge should not be significantly violated, which it was about one week ago at the recent low.  So I would not count on the chart formation to prevent a further fall.  I would risk manage your position as I outlined last week HERE.

Keep up-to-date during the week at Twitter and StockTwits (links below), where a combined 33,300+ people are joining in…

My new post about the stock market, gold and interest rates will be out by Sunday at the latest.  It’s been a volatile week  to do market timing for bitcoin!

Before we get to the chart, I should mention the main impediments for recovery of bitcoin value that I see are problems with the “#SAUS Criteria  for Cryptocurrency Success” that I’ve outlined earlier. The four criteria are HERE.  The story has been sub-optimal lately with various governments taking shots at bitcoin, especially notably, India, South Korea, and much earlier, China.

The US meeting by the SEC and interested parties this past week was seen as a big positive, but the impact on the chart has mostly washed out.  It was likely expected by all but gullible buyers, taking the bait in the down trend.  If that meeting were in fact a big game changer, the upper trend line shown would have been broken to the upside.  Instead, bitcoin is now falling to the lower trend line in the chart.

Otherwise, bitcoin has not quickly solved the problems with it’s use (I call that simply “Utility”), which include in large part the speed and ease of transactions.  You cannot wait an hour to have your bitcoin transfer cleared while buying a cup of coffee and you cannot put up with having to do tax calculations on every coffee purchase with bitcoin, which is the case now in the U.S.  Every sale for goods is a potentially taxable transaction.  Any gain must be reported to the IRS, although they are happy if you don’t file for the losses.

Now many call bitcoin “digital gold,” but the problem with this idea is that there is nothing backing it.  With gold, you have gold backing the GLD ETF for example (despite conspiracy theories).  Gold has fallen a great deal such as from the peak of around $850 in 1980 (time of Jimmy Carter hyperinflation) to the low near the time of the 2000 tech crash (Aug. 1999 to be exact; gold was $252.05) and then gold rose to $1920.80 in 2011 and is now 1315.70), but you always had gold backing gold.   Bitcoin is just an agreement by various parties to exchange it at a changing price.

Bitcoin may not, but could easily fall through recent market timing support to a new low.  Yes, it’s anyone’s guess and that is what the statements are out there – big guesses!  Manage your bitcoin holdings accordingly and preserve your principle as best you can.

You can lose money on speculations, but you cannot lose 50% very often and make it back easily, as that takes a 100% GAIN to get back to even!  Stop losses on cryptocurrencies are iffy because what would you do if bitcoin fell 50% while you were sleeping as it trades 24/7?    If you lose as much as 50%, you MUST have a relatively small position size.  For example, you could risk $500 perhaps and not have it be a difficulty for you.  Or maybe your number is only $100-200.  Invest and trade in any cryptocurrency according to what sort of loss you can sustain, and no more and never on margin or with credit card debt, in my opinion. 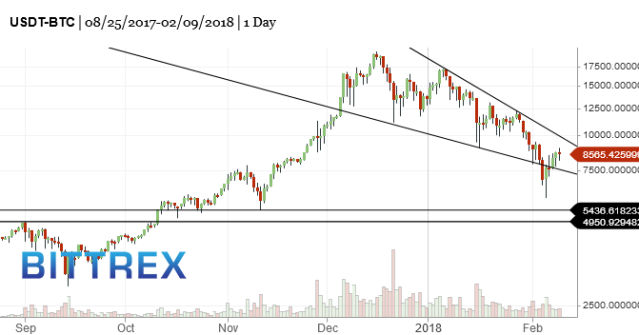 Bitcoin is still in a down trend.

If you want to know more about the charting system I use every day, go to my “Other Resources” page here:  Other Resources   It makes it much easier to follow along with me if you can see the charts and manipulate them on your own computer.  It’s a great investment to have an excellent charting system.  Check it out with a free trial at the link above.