Last week I warned: “Cracks in the Bull thesis are showing up now.  No big trend changes yet, but cracks, which could lead to more.  The SP500 Index made a new high and then pulled back below the prior breakout.”

I also said last week: “My concern is that the small caps are flirting with significantly more danger now, by slicing through their lower channel line noted in purple on the 2nd chart below.”

As I also warned you, small caps were saying investors were seeing rising risk in owning small cap, higher beta and higher momentum stocks…and they came crashing down this week.  The down trend in small caps was the clue I shared.  They began selling off on 9-04-18.  If you sold the breach of the purple line on the small cap stock chart on 9-24, you were ahead of the game.

The key to understanding “what is really going on” is interest rates.  They have been ramping up since the August low, and this week the rise accelerated, and went past the prior May high of 3.115%.

I went over my concept of “#RateShock” in the 2-09-18 issue: HERE (see section 3 on gold).  Rates are rising too fast for the current context of Ex-US slowing with extremely low rates still in both the EU and in Japan.  In addition, China has devalued its currency to counteract #Trump’s #TradeWar impact.  This means that this rise in U.S. rates is actually contractionary rather than accomodative in relative terms.

Now Chair Powell of the Fed openly says that rates should no longer remain “accomodative,” so this hawkishness has bond/Treasury investors all leaning to one side of the boat and there may have been some capitulation going on at the end of the week on the new breakout shown in the 4th chart below.  That just pushes rates higher even faster.

My sense is this: If the rise in rates continues at the steep rate of the past few days, continuing to trend upward quickly, the stock market will head into a much more significant correction.  Small caps have been hit the hardest, down about 6.48%, while the SP500 Index is down just 2.09% to Friday’s close off their highs, meaning small caps have fallen more than 3 times as far compared to the large cap decline off its top.

“Intel-igent Market Timing Signal” (Intel; INTC):  Negative. Even though INTC closed Friday at 47.03, which is above the reversal number, the stock hit the 200 day moving average and turned back down, which indicates, the bounce may be over. I said previously: “46.19 is now the reversal point to watch.”  (Reminder: INTC is our “tell” on 2nd half earnings in tech as noted HERE. 47.42 was the second “checkpoint” we were following, and it has closed below that.

Bank earnings are based on the spreads. The market was down 0.66% Friday (SPX), while BAC was down 0.55%.  That difference is not enough to say the market is confident in the ability of banks to withstand this rapid increase in rates.  The positive for the week for BAC?  It was up for the week, while the SP500 Index was down.

The next logical target if rates don’t simmer down or earnings projections sour (big banks start reporting next Friday Oct. 12)?  About a 6% fall for the SP500 Index to test the 200 day moving average.  As many of you know, we never know how a stock or index will behave at a “level” like that until we get there, so stay connected on social media during the week…. 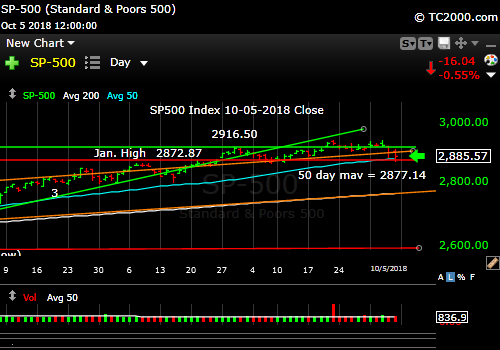 Sentiment peaked at about 20% at both the June 13th and August 29th near highs in the SP500 Index.  The pullbacks were very shallow however, only 1.42% in August and only 3.63%.  The catch?  Interest rates were much lower at those times.  Interesting that sentiment made this lower high RIGHT NEAR THE TOP. So that fits with the last high being somewhat significant in sentiment terms.  Sentiment is no where near where it got at the Jan. 26th, 2018 high however.

The Big Bull market is not likely to die here, but that does not preclude a correction of 6% or even a Mini Bear market as I’ve coined the term HERE of up to a -25% drop.  The impetus for the bigger fall that I call a Big Bear Market, a drop of up to 50% or even more is not clear unless it is simply rates ramping relentlessly toward 3.5% then 4% from here. That would do it, as it would induce a recession in my view.  China tariffs ramping to 25% early next year could also do that as rates would be further pushed to the upside.

2.  U.S. Small Caps Market Timing (IWM): Small caps could certainly bounce to a lower high, but I don’t believe the water is safe until the 10 Year Treasury Yield slows its rise and reverses.

Small cap danger still as they do poorly when growth slows.

3. Gold Market Timing (GLD):  Review the issues a few weeks back for an explanation for the abysmal performance of gold.  REMEMBER THIS from my last Sept. issue: “As rates fall again, gold may perk up a bit, but the dollar could rally at the same time, blunting the gains from falling rates.”  Gold will be tricky to trade,  but will do best if a global panic occurs, say around Italy falling apart (its market already has fallen apart; the Italy ETF EWI is down 21.4% in its very own Bear market). 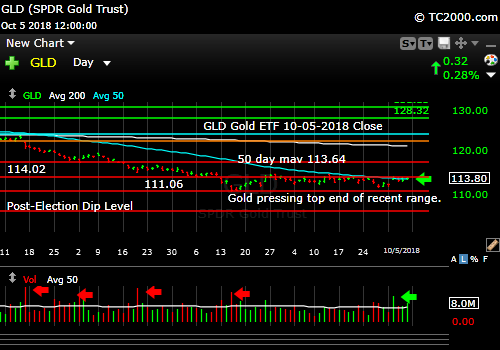 Gold is pressing the top end of the recent narrow range.

Rates are accelerating too fast as detailed above.  This chart is a big key to following the stock market in the coming weeks.

Rates are rising too fast.

The small caps broke down badly, so the SP500 Index could follow them down (as I said, about 6% from the high to start).  The small caps are a better indicator of the health of the economy, as they are most vulnerable to economic changes, and hence, are the basis for this signal.

Remember GLD is being used as an indicator for the ECONOMY here.  Scroll up and read the blurb above the gold chart please.

Rate Signal  ??????  for a further stock market rally with a BULLISH 10 Year Yield Trend.  Why the  “??????”?  It is because things have become more complicated with rates in an ACCELERATED break to new highs, and the financials turning down at week’s end.

In fact, a legitimate Bullish signal would be rising rates with rising financials such as XLF and BAC as part of that.  Minus that second part, you can forgetaboutit.  The rate increase is NOT Bullish when the two don’t move up together.  Big banks like global stability.  Furthermore, high rates ARE normally good for banks, but NOT out of context.  WHY NOT?  Because this level of the 10 Year Treasury Yield, which is too high for current conditions as explained HERE, will eventually slow the economy.

The market seems to have adjusted to rates of up to 3% or so as said in the signal summary HERE” but NOT above there.  Sept. 28th issue: “A rapid push higher in rates would mean trouble for stocks, as occurred in early 2018.”

Welcome to #RateShock II.”  Scary in RED isn’t it?

Finally: Please excuse and report all typos if you are so moved.  I do my best to pick up most of them, but have not always found them all.  Shoot me a comment (I don’t have to post your typo report as I filter them before publication, but I’ll be grateful to you!)