1.  SP500 Index: It’s still up and stuck.  The Fed is clearly going to hike the Fed Funds rate on December 16th after their mid-December meeting on the 15th and 16th.  We know this, because they have telegraphed it in a detailed way to the press.  Of course, they remain “data dependent.”  Only Retail Sales on 12-11 and the Consumer Price Index on the morning of their first meeting day will be out in time to influence their decision.  I doubt they will sway them either way as there is plenty of data already out that suggests they should wait on hiking rates if they want to be internally consistent, and yet, they say they intend to raise rates.  Manufacturing is in a steady decline (see my social media links below to catch up) and ISM services was also weak in the last report.  Raising rates into a slowing economy and worldwide deflation is going to compound the problems we face (cont. below the chart). 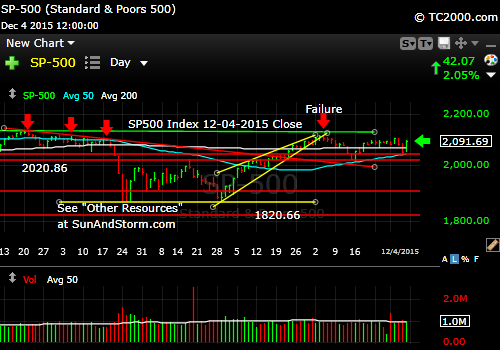 SP500 Index still stuck below a lower high and a failed minor breakout.

If the intention of the Federal Reserve is to drive us into a recession that finally bankrupts a number of companies that “should have” gone bankrupt in the last recession, but did not do so due to liberal Fed monetary policy, then it should stay the course.  The point is that tightening now is internally inconsistent with what they have been doing to date.

Is this move to higher rates being done to strengthen the banks, which it will?  Is it being done to reward the poor with a higher than zero savings rate?  The Fed has not had the interests of the poor in mind at any point since the decline began in 2007.  Why should they be interested now?  Guilt?  Not likely.  My money is with the idea that they are helping to strengthen the banks ahead of the next major recession that they ironically may create.

The Fed created the bubbles of 2000 and 2007.  It has aggravated our problems rather than curing them.  The excuse of “financial stability” only really meant to the Fed that they had to save Goldman Sachs et. al. from their own bad bets instead of allowing them to reorganize under the bankruptcy laws.

The Fed WILL likely raise rates on December 16th.  What will the market do?  IF the market sees things picking back up in the economy, higher rates are just fine as they have been in other cycles as long as they are not overdone.  IF we are actually slipping closer to recession, raising rates could tip us over much faster into a deeper recession than we would see without Fed action.

2. U.S. Small caps bounced a bit on Friday, but not to the degree large caps did. They still create more risk exposure than large caps do despite the possibility that a higher low is forming on the chart shown. There is still a failed breakout to get past at the high back in November.  The December attempt to break above that high failed. Stay clear of small caps as a group for now unless you have intimate knowledge of individual growth companies that you can substitute for the index.

Friday was an inside day. We still have a failed breakout to account for.

3. Gold had a major UPSIDE reversal on Friday. Gold (GLD) is now a trading buy with a sell stop on a close back below the July low.  Don’t put your stops in the market, or you may be picked off by the market makers/high frequency traders.

Gold has a major UPSIDE reversal.

4. U.S. 10 Year Treasury Note Yield (click chart to enlarge; TNX,TYX,TLT,TBF): Rates FAILED an important breakout above the September high this past week – for the second time.  That bodes well for lower yields, but the tough issue that faces bond Bulls is that the Fed is about to increase rates at least 2 times per many observers and perhaps as many as 4-6 times.  This could make it difficult to see short term success in bonds.

Long term?  Longer term there is still a Central Bank threat of higher inflation that will absolutely clobber bond holders. I attended a private meeting held by an excellent management firm this past week, and their view was that we are looking at 2% returns for longer term bonds over the next 10 years.  That means we have to look to stocks for adequate returns and in the equity space focus on GROWTH stocks with solid stories that will hold up despite a sluggish economy.  Where we buy more equities is to be determined (check my Twitter/StockTwits feeds for my current exposure levels and recent purchases.) 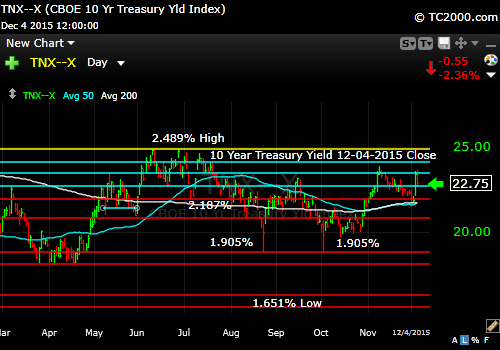 Rates failed an important breakout to the upside.