1.  SP500 Index: Despite the holiday, there’s no love in the air this weekend for Fed Chair Janet Yellen.  She had the nerve to suggest they might look at NEGATIVE interest rates, which caused the market to sell off initially.  She was admittedly baited by a Congressman to discuss it.  Then the market apparently decided that at least the Fed was not going to hike any time soon and rallied.  The rally may be short lived.  We will follow it day by day rather than guess as to where it will lose steam.  If we end up with negative rates, I expect the U.S. stock markets to be down as much as 50% from the all time highs.  There is risk when you have unelected officials (the Fed) deciding the future of our nation.  They have tried to single-handedly engineer an economic recovery using interest rates and QE.

In addition, there was trouble brewing this week in investor sentiment.  Two week’s ago I defined a new term, namely “SENTIMENT SHOCK” HERE.

You can read predictions from last week: “I don’t run this market, so I cannot tell you if the selling has a chance to stop at the now obvious support range of 1867-1871.91.  If it fails there, the further damage to the market could be extensive. The market COULD retest the October low and then resume a bounce, but I would not be overly optimistic if the 1867-1872 level does not hold.  For now, we’re in this for a bounce, and I will change my view when the market does.  We observe and respond to the market; we don’t argue with the market.  I will drop my exposure level if the market breaks down again.”

The 1867-1871 support levels shown on the chart below failed and are now resistance levels for the SP500 Index.  The index closed just below that resistance level on Friday.

Unfortunately, after the first sentiment shock just over two weeks ago, the Bull – Bear percentage spread per AAII.com was MINUS 29.5%. That means that if this Wednesday shows similar sentiment spread of > or equal to 25%, we will have had two Sentiment Shocks just a couple of weeks apart (Remember that each Sentiment Shock consists of two back to back weeks of abnormally negative sentiment).  And that finding means we are likely to see even more sentiment shocks as we did in 2007-2009 during the last Bear market.  That would suggest that the SP500 Index could sell off another 10-15% or more.  Targets beyond the near term are the province of fools.  My sense is that things are not as bad now, but if we head to negative interest rates, all bets are off.  If you want a sense of how the Bulls could turn this around, read to the end of this post… 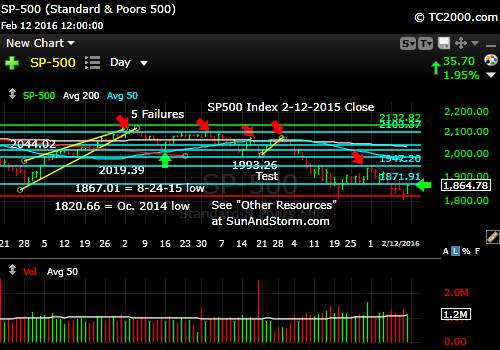 A second “Sentiment Shock” as I’ve defined it may hit this week.

Trading has beaten buy and hold substantially, since August as I’ve proven.  This will continue to be the case up until the election.  In the meantime, please keep up to date at Twitter and StockTwits: See my messages on Twitter® Follow Me on Twitter®.   Follow Me on StockTwits®).

2. U.S. Small caps failed to scale 1040 at the end of January, and remain in a Bear market.  Even with the rally Friday they are barely off their low.  I am trading midcaps for this bounce, but will continue to avoid small caps.

Small caps are still in a Bear market.

3. Gold: Rally continues. My advice from last week still holds, though you are late to enter.  Risk has risen due to gold’s recent exponential rise, and it’s important to preserve profits and principle if the rally fails.  I said, “Buy the dips rather than chase the rallies if you are not yet invested in gold, but set a mental stop and cut your losses should the trend change.  Go back to the gold charts in 2001-2004 to see how erratically the gold price can move during a large Bullish overall move.  There are a lot of givebacks of each step up, some of at least 50% of the given step up.”

Gold is exponential and subject to a sharp correction in the up trend.

4. U.S. 10 Year Treasury Note Yield (click chart to enlarge; TNX,TYX,TLT,TBF):  I made it clear that a fall to the 1.651% level was possible, and it happened this past week with Dr. Yellen’s hinting that the Fed would take its time to raise rates further.  I suspect rates will be limited toward the lower end of the range at least until U.S. GDP numbers improve.  If the Atlanta Fed is right, that improvement will come in the Q1 data (see my Tweets this week; links above).  U.S. Retail sales were a bit better than expected, which definitely helped the Bull argument on Friday. 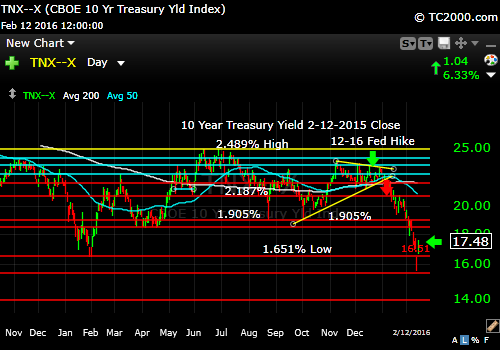 Treasuries hit important support in the range and bounce.

Stay with me throughout the week for the LATEST via the links to Twitter/StockTwits above.  Feel free to comment, retweet etc.