1.  SP500 Index: On Wednesday the Federal Reserve FOMC statement and projections said that the number of rate hikes the Fed sees for the next year is down to 2 from 4.  That means they see less growth, because rate hikes and economic growth go together.  Based on SLOWER GROWTH of the economy and LOWER EARNINGS, the stock markets rallied.  This will catch up with the markets soon, in the next earnings season come April.  If you look at the chart below, you can see how rapid this rally back up above numerous resistance levels has been.  Easy come, easy go in my view. 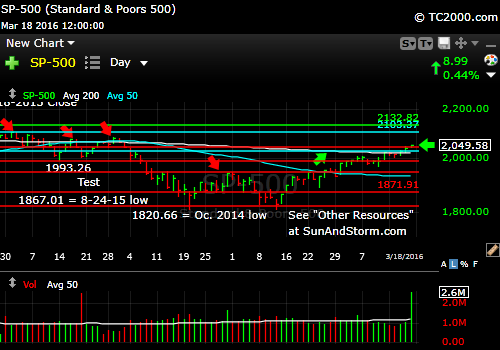 NOW if YOU believe that the market is RIGHT and the Fed is wrong about “growth slowing,” then you should remain 100% invested in the stock market.  If you believe the Fed becoming more dovish by lowering the number of interest rate increases for the next year is enough to support the stock market, despite weaker earnings ahead, stay 100% invested.

I personally have lowered my exposure as detailed on Twitter/StockTwits (See links below).  I was willing to give up some upside gain, right or wrong, because I believe the recent gains are an illusion created by a market temporarily hooked on central bank cocaine. By not selling everything, I still benefit from the rally, should stocks never fall back.  Despite my selling of some exposure, I have correctly told you that the market could rally further on a technical basis (see Twitter/StockTwits feeds).

Sentiment is leaning less Bullish this week among individual investors (AAII.com) with the Bull minus Bear spread at 3.1% this week (Bulls 30.0% and Bears 26.9% with neutrals a Bullish 43.2%).  We are a long % distance from the next “Sentiment Shock” as I defined it HERE.  Having greater than 40% Neutrals is Bullish (the sentiment position reference point is always 6 months out from the judgment of the survey members) per AAII.com archived research on the subject that I have provided the links to previously.  When investors are “confused” meaning “neutral”, the market tends to go up within the following 6 months.  This would generally contradict the idea of selling stocks here, unless they first dive and then recover by September.

2. U.S. Small caps are both above the 1040.47 level that for me defines a Bear market transition point, but also above 1080.61, and this week are pressing against the 1102.58 mark. AGAIN: My working hypothesis is that the slowing process has not yet reversed and that a retest of the prior lows (or worse) will occur by the end of June.

3. Gold:  I told you to follow the dollar and right after the Fed delayed and reduced the number of hikes, the dollar crashed to the bottom of its channel (chart posted to social media links above).  The risk now is that the US dollar actually starts to rise as Draghi and other currency warriors print their own currencies.  “Dollar up” would cause gold to pause at best or fall for a while until the Euro, yen and yuan lose enough value to satisfy those in the devaluation war.  Panic out of the financial markets on further economic slowing could do the same as rates head still lower in the U.S.  In the short term, dollar strength is a threat.

Gold hands on, but dollar is now stretched to downside adding some immediate risk.

4. U.S. 10 Year Treasury Note Yield (click chart to enlarge; TNX,TYX,TLT,TBF): Rates fell back below the 1.90%ish level and headed back down following the FOMC statement this Weds.  They should head still lower as the slowing of the U.S. economy begins to sink in during the next earnings season.

Rates reverse back down into the range.