Market Timing Brief™ for the 5-20-2016 Close: Fed Hike Back On for June/July. SP500 Index Rallies Off Support. Gold Still On Pause vs. Dollar Strength and Rising Rates.

1.  SP500 Index: The SP500 Index rallied a bit off of support, but must now rise above the yellow down trend line shown in the chart below.  Good news for the economy needs to be seen as “good” now or this rally will fail into a Fed hike.  When the economy is actually improving, rate hikes are accepted as necessary, but they are very unwelcomed when the economy is seen as weaker than the Fed is admitting.

The Fed’s minutes showed the committee is leaning toward a hike either in June or July despite the disbelief of the bond market.  Rates DID spike after the Fed minutes release and then eased a bit.  I believe the Fed is ahead of the economy, but if they feel justified by the current economic date, they will raise rates in June or July ahead of the election to avoid interfering with the election.  The next hike will come in Dec. 2016 or Jan 2017 if the economy allows it.

Survey Says!  Sentiment fell further this week among individual investors (AAII.com) with the Bull minus Bear percentage spread at -14.8% this past Wednesday (Bulls 19.34% and Bears 34.10% with Neutrals a Bullish 46.56%; Neutral Scores > 40 are Bullish for markets rising 6 months out.).  Sentiment can move either way from here.  There have been rallies and continued sell-offs from spreads at this level.  I would say sentiment is not in the way of a rally, and is predictive of upside 6 months from now.

2. As I did last week, let me say every week until we see a break that the U.S. Small caps are STILL above the 1040.47 level that for me defines a Bear market transition point.  Small caps rallied strongly with large caps off their support, but you can see that there is immediate overhead resistance than must be sliced through to the upside.  The chart for now looks like the index is fighting a slide to a test of 1040ish. 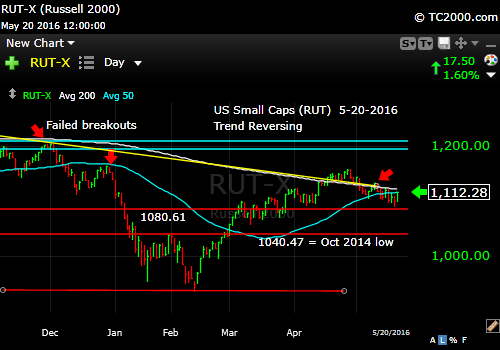 Small caps spike in the large cap rally off of support.

Gold on pause with the dollar getting Fed support.

4. U.S. 10 Year Treasury Note Yield (TNX): Rates spiked on Fed rate hike fears for June/July as I predicted on social media early in the month.  The Fed has to sneak a hike in prior to the Fall election contest if they want one.  I am not saying they cannot raise after that and prior to the election, but they would have to have a very strong reason for doing so based on the economic data. 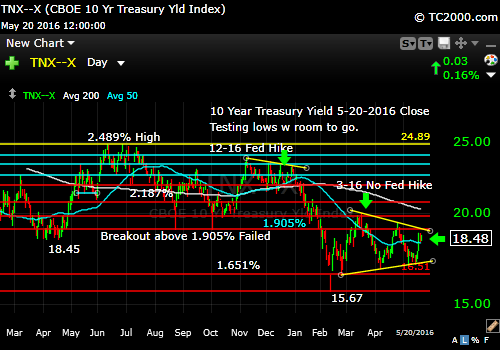