Market Timing Brief™ for the 1-06-2017 Close: New Leg Up for Trump Rally? Gold Gasping but Rallying. Interest Rates Fail to Break Out.

My goal is to provide you with the most information in the shortest time period possible, which I will take to new levels this year.  I will not bow down to the site ranking Gods.  You follow what I do or you don’t.  You hear my warnings and hear what I see as opportunities to invest and trade or you don’t.  Either way I wish you well.

I’ve been doing this market timing thing (which also involves economic fundamentals), since the early 1980’s and avoided the 1987 crash and warned investors of the 2000 crash and guided my readers through the Great Recessionary Crash of 2008-2009 in the markets to the present day.

My advice is that if you gain from these insights to please let me know, below the post.  You can also ask questions or make comments.   I’m listening…  If you do not engage, how will I know you are here?  😉

1.  SP500 Index:  The Federal Reserve has acted, employment was a bit weaker than expected, which gives the Fed some wiggle room, and the Trump Rally is now testing the top for the SP500 Index.  The Fed still intends to hike rates at least 3 more times in 2017.  That they’ve said.  The economy will slow due to their hikes if the Trump growth plan does not work or does not work fast enough.  That may be why rates have come back in a bit after failing a critical breakout (see chart #4 below).

The leader in this rally, the small caps, are down a bit and NOT back up testing the top.  I’ve taken some profits this week, but my exposure is still quite high (all posted at social media links).  I took some exposure out of China due to poor performance as the U.S. large caps rallied this week.  The China trade is being hobbled by Trump, more than it should in my opinion, but I change my opinion quickly if the picture changes or does not progress.  That’s what happened in the China trade this week.

You can see exactly what I did including selling my Facebook trading position at either of these two links:

Keep up-to-date during the week at Twitter and StockTwits (links above), where a combined 23, 005 people are joining in…

The market will take another leg up if it believes Trump will make his promises a reality and that he can get past any obstruction by the Democrats, who are showing signs of wanting to retaliate for the lack of confirmation of their Supreme Court nominee, Garland, among other things!  Morgan Stanley says “Sell the Inauguration,” but I don’t agree, exactly.   Even if they are right, I believe the market will exceed the prior top by a substantial percentage.  We will continue to buy the dips and sell a bit at the highs to buy lower.

Survey Says!  Sentiment of individual investors (AAII.com) showed a Bull minus Bear percentage spread of +21.0% up just a bit from +19.8% last week.

More Bulls can be recruited from the Neutrals and Bears before sentiment becomes extreme, but some pullbacks DO occur from around a spread of 20%, which we have, so sentiment is not that helpful at the moment.  There is room in either direction.

2.  U.S. Small Caps: Small caps are not leading the retest of the prior high.  The large caps are.  That is actually a NEGATIVE for the very near term.  This is a lousy place to add exposure to the market unless you have none IMO.

I would not add to positions without either:

Small caps are hesitating ahead of Trump’s inauguration.

3. Gold: GLD has made some more progress, but was repelled from the last upside test.  The upside target is the last breakdown area noted on the chart.  The second possible rally failure point would be the 50 day moving average or thereabouts.  The economic background is not great for gold.  I’ve gone over this in prior posts.

What would be good for gold would be (while not so hot for “people” holding currency): 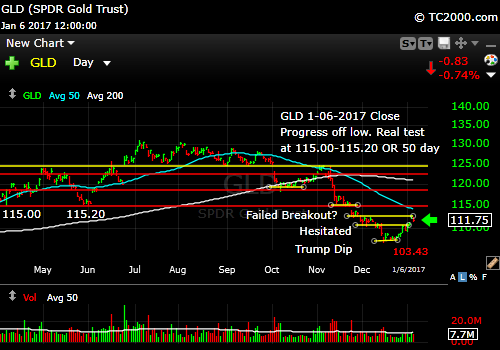 Gold gasps for air, but actually makes some progress.

4. U.S. 10 Year Treasury Note Yield (TNX): The reversal in Treasuries should be watched for a RE-breakout to new highs above the recent high of 2.621%.  That’s the key number to watch. If we go through there, we’ll be at 3% on the 10 Year faster than you can yell “Whoa Janet!”  The financials would love that, but housing would not.

The Fed raising short rates will actually serve to LOWER long term rates if the economy slows as a result.  That won’t happen if Trump’s multiple economic stimuli are launched quickly.

4 Responses to Market Timing Brief™ for the 1-06-2017 Close: New Leg Up for Trump Rally? Gold Gasping but Rallying. Interest Rates Fail to Break Out.